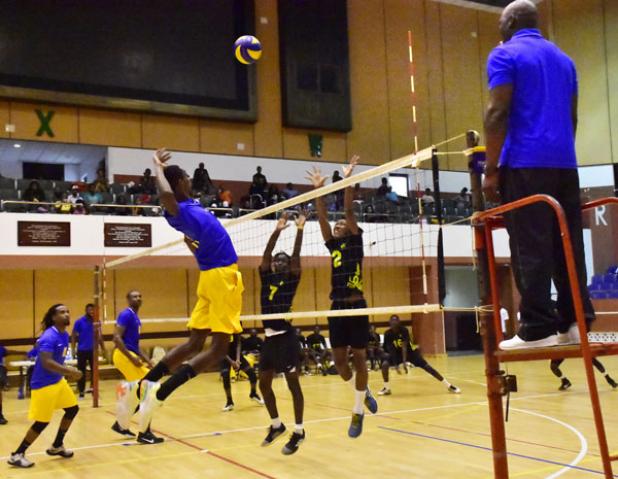 The quarter finals of the 2020 Goddard Enterprises Limited senior volleyball knockout competition is set for tomorrow.

The quarter finals of the 2020 Goddard Enterprises Limited senior volleyball knockout competition is set for tomorrow at the Garfield Sobers Gymnasium.

The top team of each Zone have been given a berth in the semi-finals while the second and third place teams will battle it out for a spot in the semis.

The two teams moving directly onto the semi-final are last year’s defending champions Deacons who finished with two wins from two matches to sit on 10 points at the top of Zone A. The second team that is through to the semi-finals and await their opponent is Progressive, who despite the other two teams also finishing with a record of one win and one loss have edged ahead with an extra point to win the Zone.

Foundation United finished second in Zone B and will battle third place Zone A finishers All Stars who are currently winless after the preliminaries.

Chargers who were second in Zone A will take on Cawmere.

The defending champions Chargers lead the women in Zone C and will await their opponent in the semi-finals after finishing with 11 points  despite a surprise loss to Toners.

The Chargers will be hoping the extra rest time will be enough for them to see the return of their veteran and starter Sharon Bovell who picked up an injury in the match they lost and sat out from the first set.

Winners of Zone D was UWI Blackbirds with a perfect 3-0 record.

Battling for the other two semi-final places will be Toners who will come up against Development In Motion who were third in Zone D with one win and two losses.

The other quarter final match will be between Deacons and Carlton both with two wins to their names.

Not making it out of the preliminaries are Warrens who were winless in Zone C and Club United who was also winless.

The semi-finals are slated for Wednesday at the same venue and the finals will be played on Sunday from 5:30 p.m. (CG)