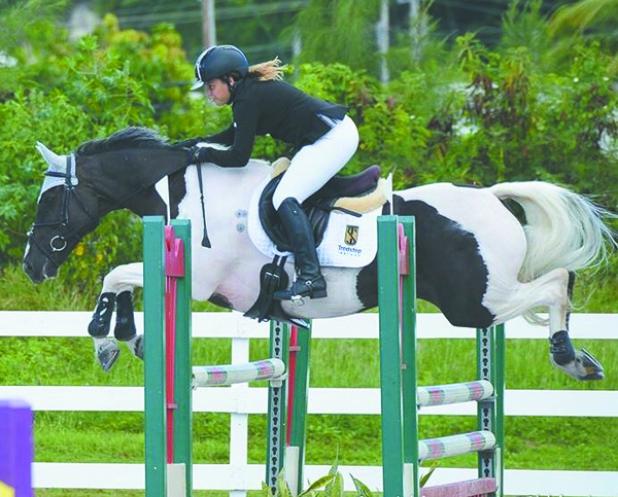 Paige Tryhane on-board Daisy in one of their two clear rounds this past Saturday.

Tue, 10/18/2016 - 12:00am
Paige Tryhane and her talented English-bred Painted Pony, Daisy, shone brightly by logging the only two clear rounds when the first leg of the International Equestrian Federation (FEI) World Jumping Challenge (WJC) came off at the Whitehall Equestrian Centre last Saturday, under the watchful eye of local Judge, Allison Cox.
It was obvious from watching the pair in action that there is a very special bond between this horse and rider, and it certainly played a key part in the two beautiful rounds which gave Tryhane the lead in the Category C competition at 1.00-1.10 metres. As a result, Tryhane is also in the lead in the National Super League Championships at this height, which will use this FEI competition for its championship points.
The Category C competition started with a small group of only five riders  – Tryhane, Monique Archer, Zoe Archer, Mahlea Archer and Tristan Blades – but unfortunately it ended with only three completing the two rounds successfully.
Zoe Archer’s stunning Irish Sport Horse, Millridge Z, on whom she won the Category C competition last year, could not cope with the extreme heat on the day and the pair was forced to withdraw from Round 2 of the competition, and hence, the first leg of the FEI Challenge.
Blades had a very unfortunate bridle malfunction at the start of Round 1, and she and her gelding Essien were eliminated from the show for jumping over the arena barrier. Blades, showing her ever-present grit and optimism, still rode the second round despite the overall elimination from the show, and had a very commendable round with only eight faults.
Young Mahlea Archer on her handsome new gelding, Calipo, on which she has only competed once before in September at a much lower height, pulled off text-book rides in both rounds to finish in second position overall in the class, with just four faults. Monique Archer on her beautiful Swedish Mare, Pin Up, finished in third spot with eight faults, having taken one rail in each round.
Sara Jones and her retrained thoroughbred, Sir Glaken, were the only competitors in the Category B 1.10-1.20 metre division on the day. Despite the lack of competition, the duo, as is customary, showed the crowd how it should be done, having only four faults over the two rounds.
Jones is the only National Championship rider at this height and has bagged the Super League Championship with the solid FEI performance.
Unfortunately, with no Category A Competitor this year at the 1.20-1.30 metre height, Barbados will not be eligible for a team score in the 2016 World Jumping Challenge. However, local riders can vie for international rankings in the Challenge.
쇓