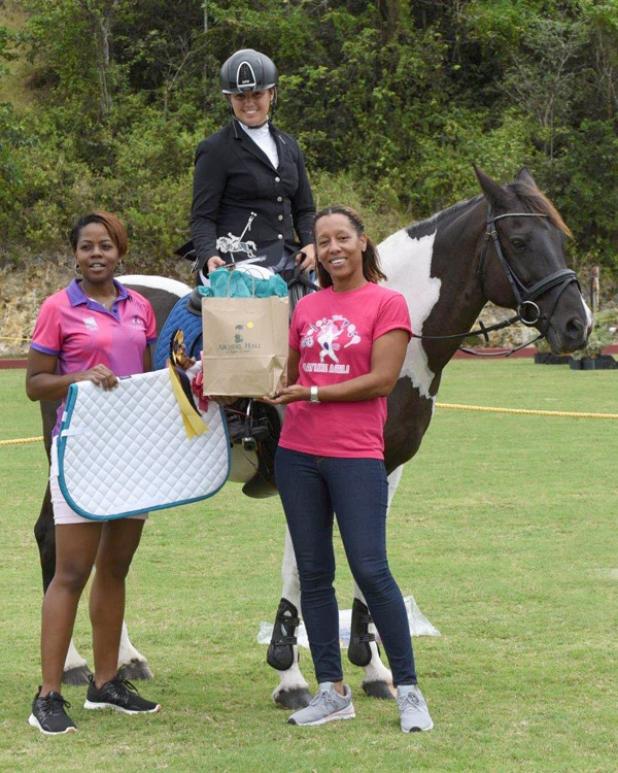 Paige Tryhane and Daisy receiving 1st prize from (left to right) BOA’s Kendia Brathwaite and Ytannia Wiggins as they celebrate Play Like a Girl/Women in Sport. (Photo by Alison Elliot)

Paige Tryhane and Daisy as they clear their last fence in Competition 1 – Round 2 – to take the win.

Paige Tryhane drew first blood last weekend when members of the Barbados Equestrian Association opened their campaign in the International Equestrian Federation (FEI) World Jumping Challenge. With the Whitehall Equestrian Centre providing a breathtaking backdrop for the first competition for 2020 on March 15, Tryhane and her partner Daisy finished at the top of the pile at the end of the day.

With the event marking one of the first of the Barbados Olympic Association’s celebrations for Equality and Women in Sport, supporters and spectators came out in their pink to show solidarity for the cause. There was a definite atmosphere of electrified excitement from both the horses and riders as they tackled the technical 440-metre course, which was designed by Christophe Johnen of Germany. The compulsory vet check was led by Dr. Laura Williams and Barbados’ FEI Judge Shakira Emtage-Cave, before the day’s proceedings were kicked off by honouring Victoria Lane/Victor as the Best Turned-out Horse.

Dylan Frost was the lone male competitor, and along with his partner Victor, as he is better known in the show jumping arena, were the underdogs of the competition in Category C at 1.10 metres. However, this pair were on target and managed to silence the spectators and competitors who watched on in awe as they sailed through the 13-obstacle course with absolute precision. They ended as the only team to clear with zero penalties in Round 1.

The ladies, not to be left out of any action, all jostled for positions as Laura Smith and Little Vegas, Monique Archer and Mario, and Tryhane aboard Daisy all ended on four penalties as they moved into Round 2.

Round 2 consisted of 10 jumps over a 400-metre course against the clock. As it was Women’s Day in Sport, the same trio of ladies did not disappoint. They stepped up to the plate to ride clear in Round 2. Also riding a clear round was Jodi Haloute with school master Calipo – a big, grey gelding.

Frost and Victor had given their all in Round 1, but were not as fortunate in Round 2 as they finished with three rails to total 12 penalties, which saw them slipping down into fifth place.

Head held high, they made an awesome turn after Jump 5, following the example of Tryhane and Daisy, but they were no match for the top-four ladies.

At the top of the podium, Tryhane and Daisy won the day after totalling four penalties with a corker of a time (49.45 seconds). Smith and Little Vegas also finished with four penalties accumulated from the first round in a time of 57.34 seconds. Third place went to Archer and Mario as they also racked up four penalties in a time of 60.18 seconds. Haloute and Calipo finished in fourth.

Tryhane, like many others, is not new to this FEI format. In 2017, she led the way on Daisy to win the Category B at a height of 1.20 metres locally to help make up a team score for Barbados. In 2019, she brought out her 12-year-old Czech Republic stallion, Corlato, to win Category C in Barbados and the regional Zone 10. She also ranked second in the world in the Challenge. This year, she returns with Daisy and currently leads the way at the 1.10-metre height.

In the additional classes, the 0.85 metre was led by Dominique Jones and Seamus, who had the only clear round in this class. Scarlett Farmer and Lola placed second with four faults on jump 7A. In the 0.70 metre, Leah Edwards and Chico were victorious in the Adult section, with Zuri Connell and Lucky Luke in second while Tryhane finished again on the podium in third with Lady Intent. In the Children’s section, Lena Tempro on Galway Girl took the win over Naiya Hinds and Mr. Blue.

This FEI event was the first of three to be held in Barbados, however, with the outbreak of the COVID-19 virus, all competitions have been suspended. Globally, the World Health Organisation has advised for further events to be postponed and FEI has joined forces to prevent further spread. All Barbados Equestrian Association shows have been postponed until further notice.