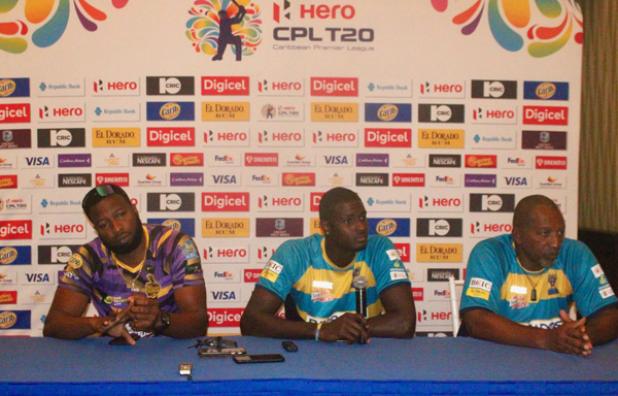 After eight losses on home turf in the Hero Caribbean Premier League, the Barbados Tridents will be hoping for a turnaround tonight when they take on the Trinbago Knight Riders.

Going into their third 2019 home-leg game, the Barbados franchise is looking to pick up some much-needed points when they face the defending champions at Kensington Oval.

During a media conference held at the Hilton yesterday, Tridents captain, Jason Holder said that although the team is obviously disappointed with their performances, they need to keep forging forward.

“I think the only thing we need to do from here is to look at the things that we need to touch up on. Obviously, our batting has been a matter of concern for us – it hasn't been consistent. But we have done a lot of good things so far in this tournament. Our bowling has been pretty tidy; we have been reasonably competitive.

“I think all teams have only missed a few opportunities and I think looking at it holistically, we just need to play our perfect and complete game. I don't know if there is such a thing, but I think we can be a lot more tidier that we have been in the games so far and it is just a matter for us to get the momentum going with us in terms of our batting and put up some better totals as far as T20 cricket is concerned,” Holder said.

Tridents coach, Phil Simmons, was also in attendance and flew to the defence of his team after accusations of selecting a weak side by a member of the media.

“Yes. We batted badly and I think that is the point here. So there is no excuses about who we selected. We batted badly. If Trinidad were down there and their batsmen haven't been batting, would you say they are a weak team? We batted badly so that's why we are where we are,” Simmons said.

Former Tridents captain and present TKR skipper, Kieron Pollard was a part of the head table and said that his team was looking forward to the game as they have not had much chance to play.

“For us it is a big game. We haven't played cricket in the last few days or so. We got rained out in St. Lucia after that defeat in St. Kitts so I think we, as a team, are hungry. We are looking forward to getting on the park and trying to get some runs for the batsmen and some wickets for the bowlers and trying to test to see where we are,.” Pollard said.

With a win needed in tonight’s game to ignite a turnaround for the Tridents, Holder said that his team just has to do what he knew they could.

“This is a great challenge for us at this point in time. We have to look at it as a challenge and also as an opportunity. There is no greater feeling than to be a match-winner from a batting perspective. In a scenario like this one when people are saying that we are weak, this is a situation where our batters can take the bull by the horns and relish the opportunity of winning a game for the Barbados Tridents,” he said. (MP)