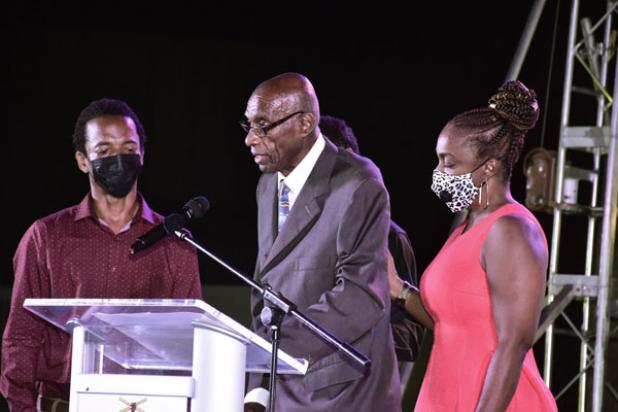 Sir Wes Hall speaking to the audience with his children surrounding him on the podium. 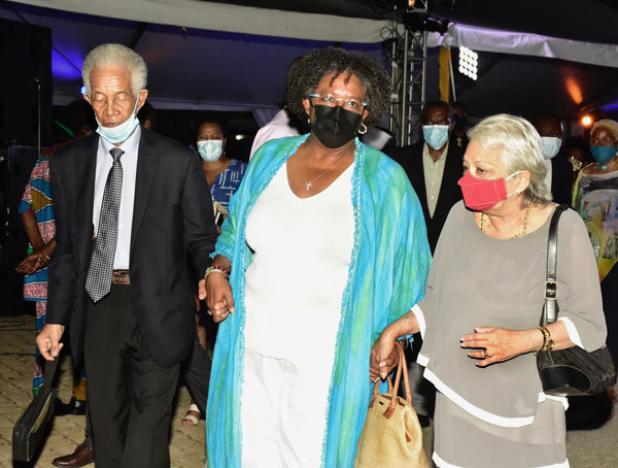 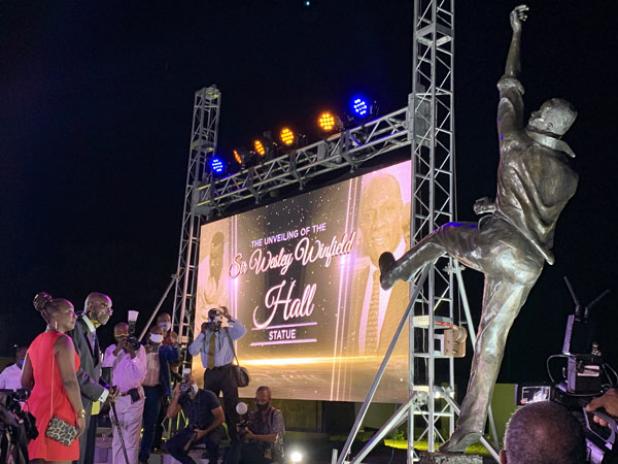 Sir Wes Hall and his daughter Dr Kerry Hall (left) admiring the just unveiled statue as photographers race to get the best image of them looking at it.

At the end of four innings an eight foot statue of the legendary West Indies and Barbados fast bowler The Reverend Sir Wesley Hall stood tall to forever be immortalised next to his friend and teammate Sir Garfield Sobers.

The statue captures the moment of one of Sir Wes’ many delivery strides and was unveiled by Barbados’ Prime Minister Mia Amor Mottley and Sir Wes who cut the string during a ceremony attended by approximately 200 people.

There were four innings on the night which depicted that of a Test match and each held a title to showcase the passage of Sir Wes in his career.

Brandford Taitt also gave a video tribute and there was also a recording of Sir Wes giving an interview as well.

Prime Minister Mottley said in her address that “the measure of the man that causes me to reflect on his being, [an] absolute gentleman is what occupies my own adulation and adoration of you, Sir.”

“It is easy for many to perfect the art of a particular discipline but it takes a giant of a man or a woman to reflect character throughout every endeavour of their lives.”

The Prime Minister said that as Sir Wes’ political career was coming to an end she had started her journey and he taught her something which she remembers to this day.

Reflecting on the evening in Parliament the Prime Minister said, “You taught me as you quoted from the Bible that above all else the future and stability of this nation must rank over everything else that we come to do.”

“I believe that those of our generation whether as cricketers, politicians or just as Bajans that we would do well to understand and learn from the example of your life and the example your character.”

She revealed that the current Government hopes that that site across diagonally from where the statue now stands should one day become a location in the near future for a hotel that can be branded after the Legends of Barbados.

“The best of our past, the best of our present to also help us earn and to create opportunities for average Barbadians to invest and own that hotel which we want to do there in the shadow of what is one of the three most iconic cricket grounds in the world.”