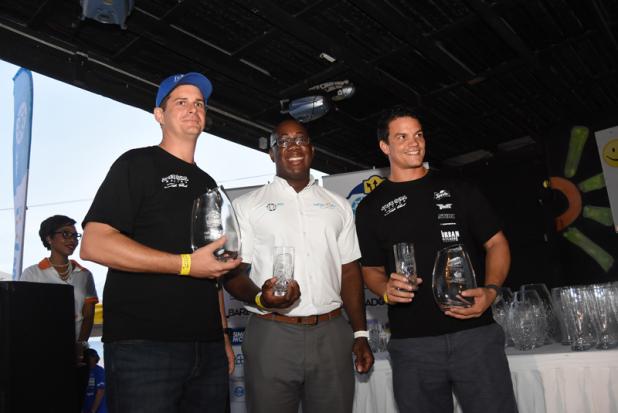 Epic! That is how Roger Mayers described his battle this year with Josh Read in Sol Rally Barbados 2016.

“I’ve been rally for 18 years, been against some of the best… I have never had anyone push me as hard as Josh (Read).”

Mayers piloted his Toyota Starlet to an impressive victory in Super Modified 2. Even more impressive was him and his co-driver Sean Corbin finishing fourth overall and the top two-wheel-drive place in the Caribbean Premier Rally.

However the gruelling rally has not always been kind to the talented driver who for the past two years has bowed out of the overall with mechanical gremlins plaguing him and halting his progress.

This year was different.

After a slight pause to consider what had been different this year Mayers initially answered with one word, “More.”

That is how he first described his preparation for the Rally.

“More prepared this year… We went through everything with a fine tooth comb and even if we thought it is good, we checked it again.”

All eyes were on this two-wheel-drive battle as there were prediction as to who would come out on top.

Read had been leading in this prediction but everyone knew Mayers was just as quick if now quicker.

Mayers spoke about trying to build up a cushion over Read but when he thought he had put seconds in Read it was the other way around.

“You put a second in him and he gives you two.”

With the knowledge the Read is a fierce competitor, Mayers said he started the 23-stage rally at 110 percent and the small cushion he had built up by the evening of Saturday quickly disappeared when he had two problems in the closing stages.

“The engine had a misfire for the first 40 feet off the line,” said Mayers who mentioned he also left the paved road briefly on the Canefield stage.

As he escaped without harm, as a result on the Sunday he said he started a bit cautious to get back his rhythm.

“Josh gave me five seconds,” said a laughing Mayers who described it as a wake-up call.

The see-saw battled continued until Read had a problem on Malvern when his engine cut out.

For Roger Mayers - the older of two brothers who have won the hearts of the Bajan Motorsports community, it was an emotional moment for him.

“I burst into tears when I came over the line.”

Roger equalled the highest placing of a two-wheel-drive in the rally which ironically was held by his brother Barry.

Now for the Starlet which has been dubbed WR Hunter for is rapid pace and should any world rally cars slip up or not push it is there to take their place in the overall standings.

Giant Killers Roger Mayers and Josh Read are expected to have a similar battle in the remaining events in the year.

But for now it is a total pull apart and check of the car for Mayers before the next event.