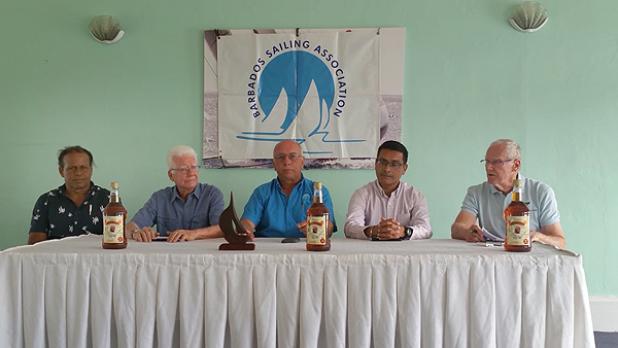 From as early as 10 a.m. tomorrow colourful sails can be expected on the horizon when the 2019 Old Brigand Rum Regatta sets sail.

Billed as the flagship regatta for the Barbados Sailing Association, this year’s edition will see vessels over four classes going at it in head-to-head races in Carlisle Bay and along the South Coast on Saturday and Sunday.

During a media conference that was held earlier this week, it was announced that the event, which is in its third year in its current form, will be seeing a new class added to the fold. With the inclusion of Kitesurfing to the Olympic programme, the sport will be making its debut on the local scene as it continues to make waves worldwide.

Speaking during the conference, Barbados Sailing Association President Gus Reader stated that it was pleasure to have the discipline join the ranks of other nautical sports under his association’s umbrella. “It’s a new addition to this regatta. Kitesurfing is the up-and-coming arm of sailing. Fast, furious and very technical. So we are very proud to welcome the kiters to the Old Brigand Regatta and to the Barbados Sailing Association’s event,” he said.

With most of the races over the two days starting in Carlisle Bay just off the Yacht Club and proceeding along the South Coast as far down as Worthing Peak before heading back to Carlisle Bay, the kite-surfers will be joining the Caribbean Sailing Association (CSA) and Non-CSA handicapped classes as well as the ever-popular J24s.

Before the action gets under way on Saturday there will be a skippers’ briefing at the Yacht Club on Friday evening at 6 p.m. to ensure that everything is in place for the proceedings on both days. With the numbers in all classes lower than usual, Barbados Yacht Club Commodore, Dick Stoute, explained that there was a lull across the region but that it was a cycle and there was an upward trend being observed.

“The Barbados Yacht Club has a proud history of hosting regattas like this. We have hosted many regattas and we have a mandate to support sailing and sail training and we welcome this opportunity to lend our support to our to the Barbados Old Brigand Regatta 2019. This is the third year for this regatta and it is always a very fun event and attracts a lot of local attention. Sailing has been going up and down over the years and I think right now it have been going through a low. And it is just really to start going up from here. I just came back from St. Maarten where they had 125 boats at their regatta and they piqued at something like 230 several years ago. But they went down and are on their way back up now. So I think that we can expect a similar pattern here in Barbados, where you go through a lull and then interest returns to sailing. I certainly hope so and the Yacht Club will be doing everything it can to ensure that happens,” Stoute said.

Kevin Talma was on-hand to represent the new kids on the block and said that they were pleased to be included in the prestigious event. “For now there is a little flurry in our community and everybody is getting ready to participate and a lot of encouraging going on because the tradition of racing and kitesurfing is not big in Barbados. It is growing very big worldwide but it is not big in Barbados yet, and our community needs a a little nudge and we thank the Barbados Sailing Association and Old Brigand Rum for giving us that nudge and this little platform to start our racing,” he said. (MP)