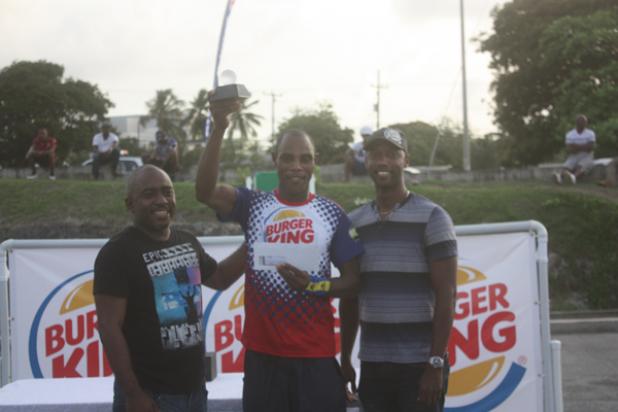 Tue, 06/14/2016 - 12:00am
By:
Corey Greaves
THERE is no stopping Julian ‘Michael Jackson’ White who sent a sound message to his rivals when he swept the Burger King Invitational Road Tennis tournament held at Sky Mall.
White punctuated his early form by winning the third final on Sunday against Mark ‘Venom’ Griffith in a rain affected final series.
With only the semi-finals and final to be played, White and Griffith faced off for the third time in as many finals once again.
It looked as though Griffith, who had been defeated twice before by Jackson had found his remedy this time as he jumped out to an early 4-1 lead in the shot gun tournament where only one set counts.
But ‘Jackson’ fought back thanks to a number of spoils by ‘Venom’ and White took the lead 8-7.
White tried to pick up his attacking play in the middle of the game but it was complimented by a number of spoils which allowed Griffith to open a 17-13 lead.
Not daunted by this, White began to pull back with Griffith hitting the ball long and wide on countless occasions which saw Jackson going on a 7-0 run to take the lead and go on to match point winning the game 21-19.
Speaking after the game, White said that he was not worried about the lead late in the game as he had come from behind before to win against Griffith in the series.
The talent player attributes his form and being able to defeat Griffith who is ranked as the number one after his performance last year, to being able to practice.
He said that he had been on vacation from work and he has been playing and practicing tennis everyday morning and night.
The top prize of $500 for each victory saw Jackson carrying off a grand total of $1500, while Griffith won $300 for his second place each match for a total of $900.
Losing semi-finalist each got $100 each game.