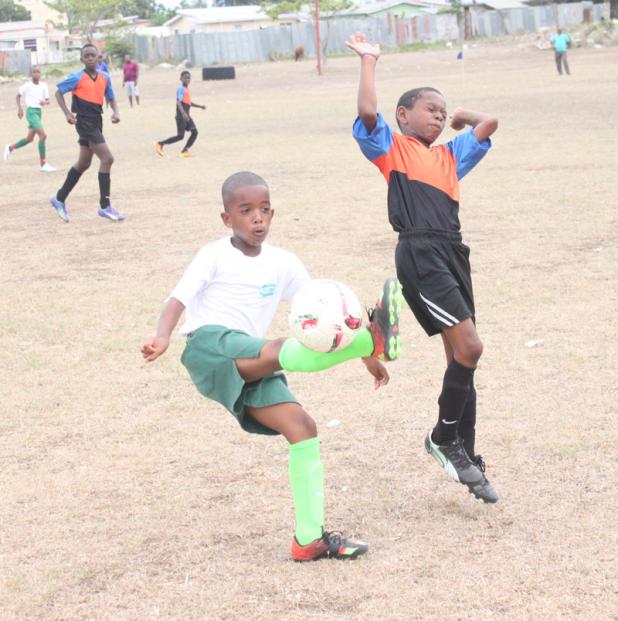 Seth Jones of St. Cyprian’s getting his foot on the ball as Wilkie Cumberbatch’s Davion Brathwaite tries to avoid the impact.

Thu, 05/26/2016 - 12:00am
By:
Michael Phillips
A six-nil win in their latest game was not enough to put Hillaby Turners Hall in one of the two top spots in their zone when the BICO National Sports Council Primary Schools Football Competition continued yesterday. Playing at Shorey Village in Zone 3, victory over St. Elizabeth put them up to 12 points behind former winners, Grantley Prescod (18) and A DaCosta Edwards (12). The win was secured by braces from Shamari Payne and Omarion Gill while Peter Lowe and Saddio Payne had one each.
The woes did not end there for St. Elizabeth as they played another game on the day. They were held to a second loss, this time going down to St. Joseph Primary. A single goal from Isaiah Quimby was all that was needed to give them three points. They too played twice but their luck did not extend to the other fixture. They faced the second-placed A DaCosta Edwards in a three-two clash. Benlee Sealy, Sh’Cur Bryant and Rasean Rudder scored for the winners while St. Joseph credited their goals to Quimby and an own-goal. Another win on the day for A DaCosta helped them up to their tally. Facing Holy Innocents, Bryant, Rudder and Kydaine Worrell scored one each for a three-nil win.
Charles F Broome picked up a two-nil win to see them to the top of the keenly-contested Zone 4. Playing at Blenheim against George Lamming, a two-goal haul from Khalil Vanderpool put Charles F in a position of power for the first time in recent years on 17 points, seven games in.
Second and third place in the standings go to St. Cyprian’s and Wilkie Cumberbatch respectively on 15 and 13 points. Those two played to a one-all draw after St. Cyprian’s Marcus Whittington scored a beautiful equaliser to answer Thierry Ince’s first-half goal.
Losing form after their best start in the tournament, People’s Cathedral picked up a win over fourth-placed Luther Thorne. Luther Thorne had no replies for the three goals as Ethan Squires scored once and Matthew Clarke brought home a brace. St. Giles were also in winner’s row as a Jabarrie Trotman goal set up a one-nil victory.
St. Ambrose were held to yet another loss after facing hometown boys, Belmont Primary. Although they were allowed a consolation goal, compliments of Christian Gill, goals from Teon Cadogan and Tyrell Alleyne brought up the two-one result.
Although they are currently in third place in Zone 6, a few games in hand will augur well for Wesley Hall Juniors. Playing in their third game for the season, they put four unanswered goals past St. Mary’s Primary to bring up their third win. They were at Passage Road when Kevion Newton, Kai Cole, Dakio Worrell and Jaden Nurse all pitched in with a goal apiece. Another big win was recorded at the venue as second-placed Westbury Primary blanked Grazettes, three goals to none. Dimitri Pooler, Tashawn Weekes and Axio Daniels were responsible for the goals there. The only other Zone 6 game saw Trinity Academy handing down a three-nil drubbing on Eagle Hall at the National Stadium. Two goals came from Khaliq Haynes while Joshua Haynes added the third.
Blackman and Gollop remain unbeaten as they head Zone 8 and a win yesterday at King George V Park kept them in good stead ahead of the next-nearest team, Reynold Weekes Primary. The leaders faced St. Luke’s Brighton, who are fourth on the ladder, and came away one-nil winners through a goal from Tyler Niles.
Reynold Weekes stole away a win from Gordon Walters after a Richem Atherley brace trumped a single goal from Hasani Alkins. Bayley’s also got their hands on three points after Omari Haynes secured a win over Hilda Skeene with his lone goal. St. Mark’s Primary dropped points twice after first being a no-show against St. Martin’s Mangrove, then losing to Bayley’s in dreadful fashion. Shamar Clarke gave Bayley’s two towards the five-nil result, while Shamar Griffith, Codi Sargeant and Haynes hit home one each.
The competition is set to continue today with games at Speightstown, Bagatelle, Trents, Green, Ellerton, Gall Hill and Briar Hall.