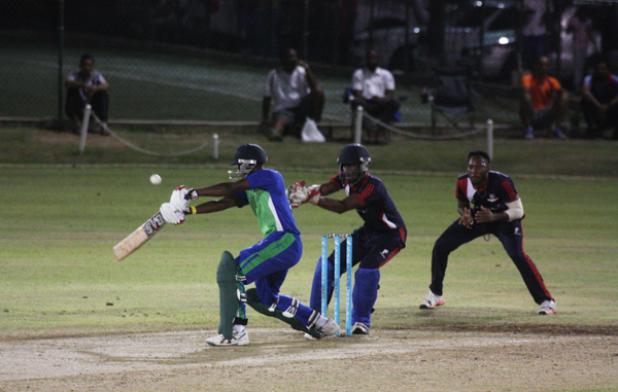 Wed, 06/15/2016 - 12:46am
By:
Corey Greaves
Empire fell to the Barbados Defense Force Sports Programme (BDFSP) in a nail-biting semi-final of the Barbados Cricket Association’s Sagicor General Twenty20 Championship at the 3Ws Oval, University of the West Indies Cave Hill Campus on Monday night.
After a spectacular 19th over by Empire’s Justin Greaves, BDFSP needed eight runs from the final over which was to be bowled by Empire’s captain Kevin Stoute and a new batsman to face after a run out off the last ball of the previous over.
A single was taken off the first delivery, but batsman Vitaly Wilkinson turned and wanted a suicidal second run and was left short of his ground.
Rico Wiggins, who had top scored for BDFSP with 39 runs off 34 balls, was bowled off Stoute, who had been dismissed earlier without troubling the score in the second over.
Wiggins was dismissed off the third ball leaving his team needing five runs for victory.
The new batsman, Tremaine Harris swung hard at the next delivery and missed and it looked as though Empire would be able to defend their modest total of 112.
But Harris managed to squeeze two runs off the fifth ball of the over.
With three runs required off the last ball many thought that Empire would have sealed the game, but Harris played a ball down to long off and he and Ackeem Clinkett knew that two runs would have forced a super over and they sprinted down the pitch. Turning for the second run the ball had already been gathered and was on its way to the wicketkeeper but it was too high and squirted down to a short third man.
Without hesitation Harris and Clinkett turned for the winning runs as the short third man fumbled the ball and was unable to gather it leaving BDFSP to complete the winning run.
Empire had opened with two spinners as they set out to defend 112 and they held BDFSP to some low scores.
Empire had won the toss but were bowled out for 112 off 19.1 overs and were just too short of runs this time around.
Top scoring for Empire was Justin Greaves with 26 runs, while BDFSP off-spinner Ackeem Clinkett was the pick of the bowlers with four wickets for 17 runs off four overs.