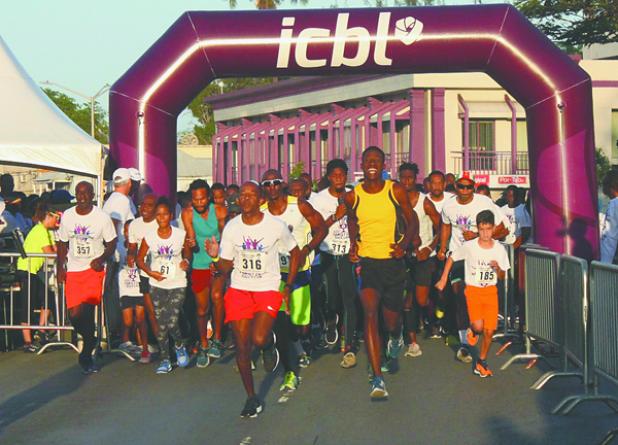 Competitors at the start of the 5K Run.

Champions come out for charity

Local road running stalwart Jerome Blackett was the first person back over the line yesterday morning when the Insurance Corporation of Barbados Limited (ICBL) hosted their annual Family Fun Walk and Run. Taking on the 5K course, which moved off from the insurance company’s Roebuck Street headquarters at 6 a.m., Blackett won from a stacked field to lead home Rudolph Rock and Micah Stuart.

The loop, which took participants through the environs of the neighbouring districts, saw Marissa Small crossing the line as the first woman home. She was followed by Shanna Jones and Christina Truss.

The ninth edition of the event also saw competitive and casual athletes taking in a 5K walk and a 10K run and Shamel Maynard led the way in the 10K run. Winston Neblett and Mark George were second and third in the men, while Carlie Pipe, Kristina Hassell and Lesley Goodfellow were the first females over the longer distance.

With participants treated to a Health Extravaganza after the morning’s activities, they got the opportunity to sample products and services from event partners and sponsors such as Stansfeld Scott, Roberts Manufacturing Pharmacy Sales, General Distributors, Barbados ADMC, Purity Bakeries and Williams Industries. Along with sampling, runners and walkers were able to get health checks and aerobic dance sessions to warm down.

Speaking to The Barbados Advocate, Samantha Suttle Marketing Executive at ICBL explained that with over 500 runners taking on the courses and an undisclosed number of walkers, the company was overwhelmed by the response this year. “We are really pleased with the turnout, especially for the runners – this was the first year that we ran out of race-tags – and we were really enthused with the support that the runners and the walkers have shown towards this activity for the last nine years,” she said.

This year, proceeds will be going to three charities with PAREDOS and the Diabetes Association of Barbados chosen by the company, along with the Nature Fun Ranch being selected as the third. “We have done three charities before but I think that this is the first year for the Diabetes Association and for the public vote this year, we opened it up to a lot of smaller charities. So you did not have the popular names that people would have recognised, but they are also worthy causes that are making a concerted effort to help Barbadians and to make Barbados better for everyone. We really wanted to recognise them and that is why we had the theme this year ‘Champions for Charity’,” Suttle said.

With their sights set on a bigger and better event for 2019, ICBL Chief Executive Officer and Managing Director Geoffrey Scott said that the initiative was not about ICBL but provided a chance for them to help promote great causes, get their community together and raise money for three great charities, adding that it was the least they could do. “It’s an important thing and in these tough times we can’t expect government and the traditional partners to be able to provide all the services and all the help to people that need it. It is really time for corporate Barbados to step up and to show support. At ICBL, for corporate social responsibility, we have a number of initiatives and of course our fun walk and run is one of the biggest but it’s not the only one. You’ll see us in the community, you’ll see us supporting sporting events and sports groups at a junior level. We encourage youth wellness, youth education and youth sports. It’s just the right thing to do,” Scott said. (MP)