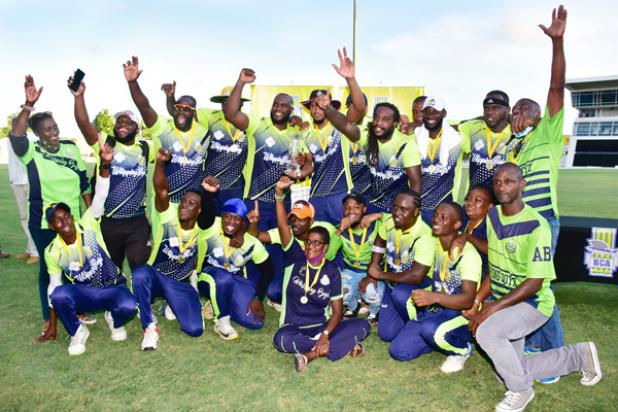 Led by the Man-of-the-Match Renaldo Brathwaite, BWU Gladiola completed a comprehensive victory over Wanderers by 36 runs in the Final of the Barbados Cricket Association (BCA) Elite/Division 1 Twenty20 Cup at Kensington Oval.

Gladiola’s only defeat during the tournament came at the hands of the 2019 champions Carlton, while Wanderers entered the final undefeated.

Wanderers won the toss and sent the Rices-based team in to bat, which appeared to be a good move initially as Gladiola slipped to 242 in the third over.

However a 52-run stand between Martin Nurse and Brathwaite dug them out of the slump as they started to move the score along before Nurse was dismissed for 33 runs off 27 balls.

Brathwaite shared in another half century partnership, this time it was with Ashley Nurse as the pair put on 55 runs for the fifth wicket.

Brathwaite was the only highest runscorer in the game as he finished on 51 runs from 40 balls, which included two boundaries and three sixes.

Gladiola went on to post a total of 172/5 with Ashley Nurse finishing undefeated on 38 runs from 22 balls, which included three fours and three sixes.

In reply, Wanderers found themselves in troubles as they slumped to 44/4 on the back of some impressive bowling by Miguel Cummins, who bowled three overs on the trot for a mere six runs.

Cummins beat the outside of the bat of the opener with his out swingers, while the bowler at the other end capitalised by taking the wickets.

With the Wanderers so far behind the required run rate, Roshon Primus injected some much needed scoring, but he fell to Kadeem Miller for 39 runs off 31 balls to end his cameo.

Captain Deigo Stuart ended undefeated for his team with 37 runs off 27 balls, but his team was never close to troubling the Gladiola side.

Damario Goodman finished with three wickets for 19 runs off his four overs as Gladiola captured their first title. (CG)