Ellerton took a 3-0 win over Evans Maughn at Barclays in the Under-11 Tier competition. 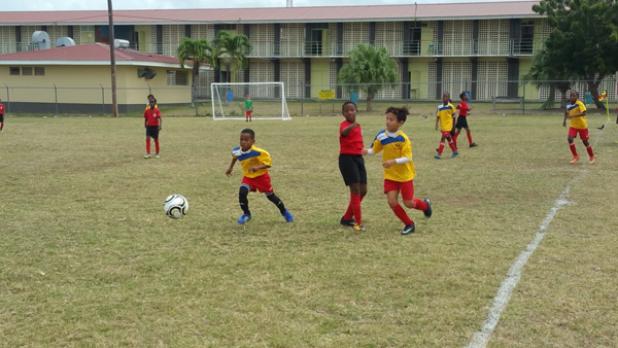 Kick Start whipped Youth Milan 4-0 in Tier 1 of the Under-9s at the Pine Resource Centre.

Although the Barbados Premier League was off this past weekend, there was still a shower of goals as the rivalries in the National Youth Cup raged on. With games played at venues around St. Michael on Saturday, several teams packed up on points as they took some hefty wins early on in the tournament.

Pro Shottas ran off with one of the biggest wins on the day when they destroyed Wildey Sports Academy in Tier 1 of the Under-17 division at Dover. With the Wildey lads unable to make a single reply, Mikalai Dziazko (9th and 42nd), Robiniho Phillips (21st, 29th and 40th), Zuhri Morris (63rd and 66th) and Zachary Bellamy (67th) saw the Shottas to eight.

At the same venue, Mavericks had a 4-0 win over Pinelands with Raequan Jones racking up a brace after goals in the 60th and 62nd. He had some help with Nico Samaroo putting one past the keeper in the 15th and Jelani Chandler driving the final nail in the coffin in the 77th.

Over at Meadow Road, Kick Start got their morning started with an 8-0 victory over the Barbados Soccer Academy. Goals from Roscoe Fulton, Matteo Batson, Khalil Vanderpool-Nurse, a brace from Ethan Goodridge and a hat-trick from Jelan Ward saw the Under-13 winners of last year’s Guardian Group Youth tournament to the tally.

To their credit, the Soccer Academy’s other team in the age-group copped a 4-1 win over Pro Shottas. This time, Azari King scored two, while Elisha Harding and Joshua Harding added one each. Seth Jones came through with the consolation for Pro Shottas.

At the Under-13 Tier 2, Technique blasted Eastern United over at Blenheim. When the dust had finally settled, seven unanswered goals had been recorded. Kemani Maynard, Javonte Griffith and Kiaros Greaves were all responsible for two each while Xavier Sealy had one of his own.

The competition is set to pick back up next weekend with games also being played at the Pine Resource Centre, Parkinson Field, Barclays, Dover, the Usain Bolt Sports Complex and the Wildey Turf.