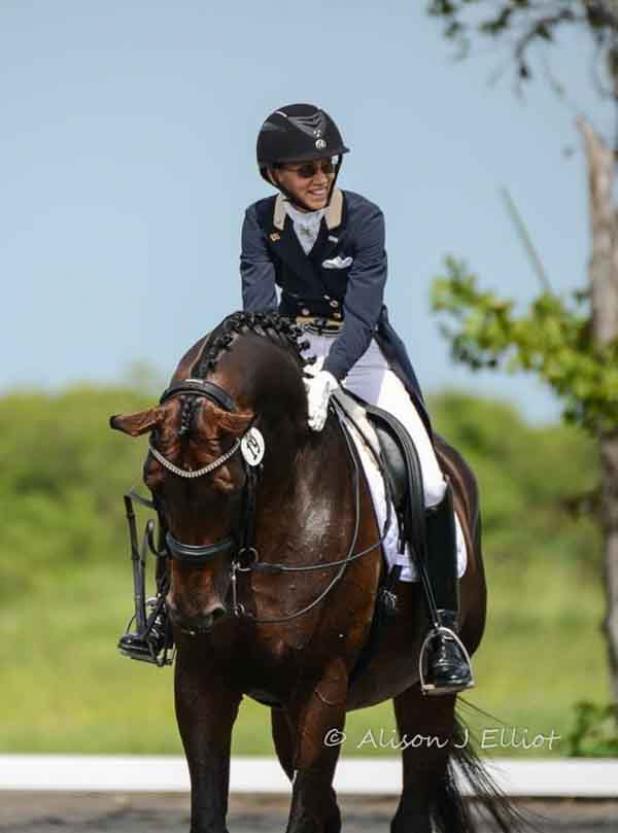 Roberta Foster astride Chichic continues to excel in dressage.

Equestrian teams from Barbados have eclipsed their regional neighbours in two events this year – show jumping and dressage.

This year’s CEA competition was one with a difference as it was conducted via video judging with USA Judge Heather Stalker, since foreign judges were unable to travel to Barbados.

Despite the challenges, local riders proved themselves dominant at the Adult Level of the Caribbean Equestrian Association’s Regional Dressage Challenge, with the team of Roberta Foster, Mackenzie Manning and Candace Jones taking the win over Trinidad, Bermuda and the Cayman Islands with a combined score of 209.150.

At the highest level of competition, 2019 Pan Am Games Athlete Roberta Foster and Chichic scored 69.88% at the Intermediate 2 level with their added bonus for level of difficulty. This is quite an achievement since Foster had only started competing at this level last year.

Former Junior star, Mackenzie Manning, who has recently returned from training in the USA with her stunning new mare Ruveyda, scored 70.65% for the Prix St. George Test with her added score; and right behind Manning was Bree Anne Hurdle, who has moved up to USEF Fourth Level and finished with a solid score of 67.13%.

At Third Level, the very talented Tammy Pinto rode her retrained thoroughbred, Valentino, for an excellent score of 63.63%; while junior Scarlett Farmer stepped up to second level to end with 65.64%. Farmer also achieved the highest score of the CEA Competition in Barbados and the highest First Level Score in the region astride Man in Black with 71.61%.

The winner of the First Level Adult Test was Gerdine De Vries on Valentino with 69.11%, followed by Monique Archer on Whizz with 67.58%. De Vries also scored the highest marks regionally at Adult First Level.

In second place in the Junior First Level competition was a tie between Farmer on Lola and Isla Domengue on Rumba with 65.64%. Domengue pulled out a great score at Children’s Training Level on her new pony, Vanity, with 70.17%, while Marlie Pinheiro, the third member of the junior team, riding Rasmus, closed at 66.03% at Training Level.

At Adult Training Level, Paula Galbraith took the win on Soca Kid with another regional high score of 71.55% and Candace Jones took second place with 68.62%.

Unfortunately Galbraith did not make the team and handed that place to Jones because she had ridden another test prior to achieving her high score.

In the Freestyle Division the winners were: Foster at I2 level, Manning at I1 level, Hurdle at Third Level, De Vries at Adult First Level, Farmer at Junior First Level, and Pinheiro at Training Level. The Adult Freestyle Team comprised of Foster, Manning and Pinto and the Junior Freestyle Team included Farmer and the two Pinheiro sisters, Marlie and Rylee.

In the additional classes that were not part of the CEA Competition, 2018 CAC Games Rider Laura Smith onboard Little Vegas won the CCI 2* Eventing Dressage Test with 67.05%, Marlie Pinheiro won the Intro C Test with 67.25% and Erin Skinner won the Intro B Test.

Earlier this year the Show Jumping Team of Candace Jones, Dominique Jones and Naiya Hinds bested both Trinidad and Bermuda to win the Regional Jumping Challenge with no faults.