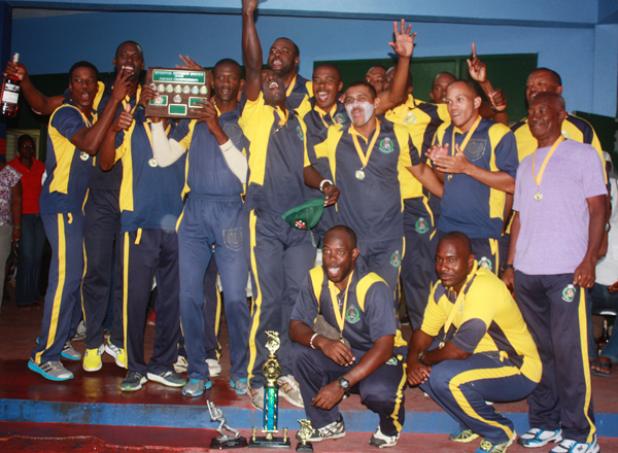 Thu, 03/31/2016 - 12:00am
A CENTURY from opening batsman and man of the match in the final Richard Greaves guided the Barbados Police cricket team to victory in the recently concluded Regional Police T20 Cricket tournament in Barbados.
Playing Grenada in the final at the Weymouth cricket field, Barbados Police team posted a score of 193/4 off their 20 overs.
Greaves finished with 124 before he was caught by Laurie Williams off the bowling of Josh Thomas. In his knock he struck 11 boundaries and four sixes.
He also shared in an 111-run opening partnership with his captain Roger Williams.
In reply, Grenada tried to go hard at the target with their opening batsman Leon Chichester and Randel Baptiste attempting to strike almost every delivery to the boundary.
However, it was not to be and they fell behind after five overs with only 28 runs on the board.
Wickets started to tumble as they attempted to pick up the tempo and the quickly slumped to 49/3 in the eighth over, with Baptiste falling for 33 runs.
A small sign of a partnership started to build in the middle but was broken up and not even a quickfire 27 from Kenroy Peters was enough to stave off the pending defeat. Barbados place all of their fielders in the slips for the final delivery and shockingly Josh Thomas struck the ball to the bowler and was run out.
Grenada reached 134/8.
Greaves was also the batsman with the most runs in the tournament 229, while Josh Thomas from Grenada took the most wickets with 15. The wicketkeeper with the most dismissals was Kevin Lamont from Trinidad and Tobago with four catches.
The tournament saw teams participating from St. Lucia, St. Vincent and the Grenadines, Trinidad and Tobago, Grenada and host Barbados.
The full Barbados Police team was Roger Williams, Larry Babb, Karran Bhola, Brian Corbin, Renaldo Downes, Stefan Gooding, Richard Greaves, Ramon Harewood, Ashane Haynes, Chad Linton, Amahl Nathaniel, Revendra Persaud, Tyson Small, Dwayne Yearwood and Jamar Yearwood. (CG)