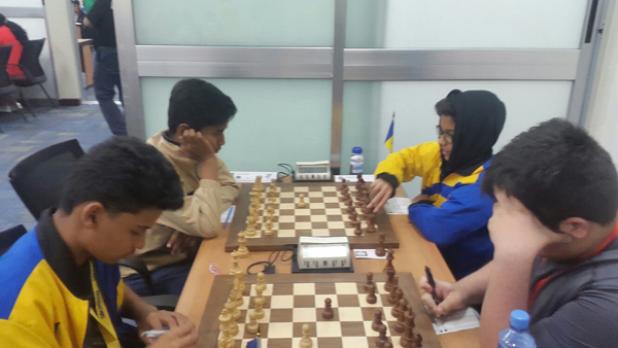 Several Barbadians are in contention for medals after the second day of the Seventh Carifta Chess Championships in Suriname on Saturday.

The list is headed by Leigh Sandiford and Jaydn Gill, who both have three and a half out of a maximum four points after the fourth round of games at the Ministry of Finance Building in Paramaribo.

Despite losing two games each, Gabriela Cumberbatch and Kiarra Eversley are also in the medal hunt among the Under-20 girls who are playing with the boys due to the small number of females entered.

The Sandiford brothers were involved in two of the most intriguing battles on the day in the boys’ Under-16 category.

After winning his third consecutive game in the morning, Leigh, who has a rating of 1481, achieved a draw against Suriname’s Imaan Kalidjo, whose rating is a significantly higher 1807. It left him in joint second place behind front-runner, Trinidadian Alan-Safar Ramoutar.

Kyle, who has a rating of 1 535, also won his third straight game in the morning before losing a marathon four-hour duel with Ramoutar, the top-ranked player whose rating is 2071. Kyle, Haynes, Estwick and Holder are among 11 players on three points in a hotly contested boys’ Under-16 category.

It was just as competitive in the boys’ Under-12 division where Gill completed two wins to move to three and a half points – half point behind three front-runners with a perfect record. Jackman, Clark and Prescod, who won both of his games on Saturday, are among ten players on three points in this age-group.

Greenidge was in joint second place in the girls’ Under-16 category after winning her third consecutive game before going under to No. 2 ranked Jamaican Adani Clarke. Another Barbadian, Pritika Kandamaran, was just behind on two and a half points and also still in medal contention.

Barbados won 14 of their 22 games in the morning session and added a further ten victories in the evening. Several players won one game and lost another while debutant Jalia Linton, who suffered two defeats on the first day, bounced back to score two victories in the girls’ Under-12 division.