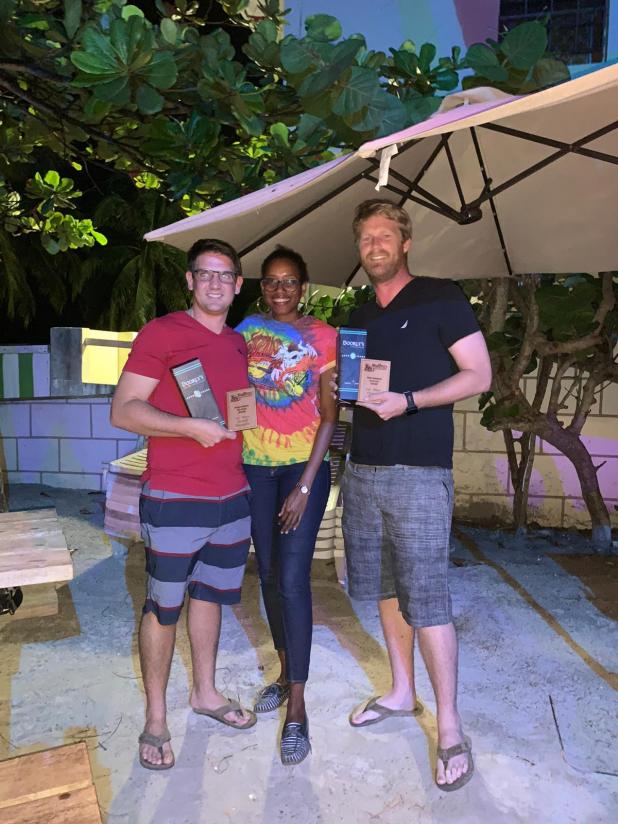 David Armstrong and Andrew Croney on their way to winning last Saturday’s final round of the Chefette MudDogs Safari Championship, and with it the titles of 2020 Champion Driver and Champion Navigator. (Photo courtesy of Image Vault)

David Armstrong and Andrew Croney are the 2020 Barbados Rally Club (BRC) Chefette MudDogs Safari Champions, after winning last Saturday’s (November 14) third and final round of the curtailed season. Armstrong joins his father Chris, who was Champion Driver in 2012, on the Club’s Roll of Honour, while Croney adds a third Navigator’s crown to those won in 2018 and 2006, when he won his first overall title from the Novice class.

They amassed 176 points during the season in their Nassco-backed Toyota Hilux, two more than Chris King and Warrick Eastmond (Nissan Frontier), who had won the season’s delayed first Safari in July and were the route-setters for last weekend’s MudDogs November Safari. Willie Hinds and Wayne Manning (Suzuki Samurai) finished third respectively in the Driver and Navigator standings, having won the second event in September.

Armstrong and Croney first teamed up in the final Safari of 2018, in which they finished second, helping Croney to the Navigator’s crown after sitting with Jean-Marc Cozier and Benjamin Moore earlier in the season. Last year, the new partnership placed second and fourth twice each in their first full season together, before finishing third in this year’s opening round. When a crew act as route-setters, as Armstrong and Croney did in September, they earn a score equal to their best result of the year – victory at the weekend, therefore, sealed their Championship win.

Saturday’s route, which covered around 135 kilometres islandwide and ran from day into night, started in the parking lot outside Motorsport Services, Haggatt Hall, St. Michael, at 2:01 p.m. The dinner halt was at the Vaucluse Raceway in St. Thomas, with the finish at the new Sol Charnocks facility opposite the Grantley Adams International Airport.

Gary and George Mendes were comfortably ahead after the first route, having incurred only 797 penalties in their Daihatsu Rocky, almost 400 fewer than Armstrong and Croney (1177 pens), with Stephen Mayers and David Reece (Toyota Hilux) narrowly edging Hinds and Manning for third place, 1358 to 1384 penalties.

The Mendes brothers dropped back on the second route, however, finishing only fifth, as Armstrong and Croney were the route-winners, to claim overall victory, with Hinds/Manning and Mayers/Reece again evenly matched, the advantage going to the former this time round, placing them third by just 40 penalties at the end of the event.

Competition for the Championship titles was even closer in Class B, with a tie for first place in both the Driver and Navigator standings. Despite being the highest-placed class finishers in the July and November Safaris, Shaquille Jemmott and Shanica Toppin (Suzuki Escudo) lost out to Abdullah and Bilal Patel (Mitsubishi L200) in the tie break, which is based on the average total of penalties incurred by each crew in common events. Both crews competed in all three events this year, the average penalties for the Patels being 3045, compared with 4162 for Jemmott and Toppin.

After Tuesday night’s (November 17) Prizegiving Carib Beach Bar in Worthing, Christ Church, MudDogs Chairman Ricky Holder said: “The weather gave us a trying event, with lots of mud and stickups, so it was a great way to end such a difficult year. We have had at least one new winner, Driver or Navigator, at every event, so congratulations to David Armstrong, also Chris King, Willie Hinds and Wayne Manning for joining the winners’ list earlier in the year. Let’s hope for more of the same in 2021.

“With the pandemic making it such a tough year for everyone, I would like to thank all the competitors and marshals for their dedication all year and especially in the conditions at the weekend. Thanks also to R L Seale & Co for the prizes and to the Carib Beach Bar for allowing us to hold our Presentation there,” it was stated.