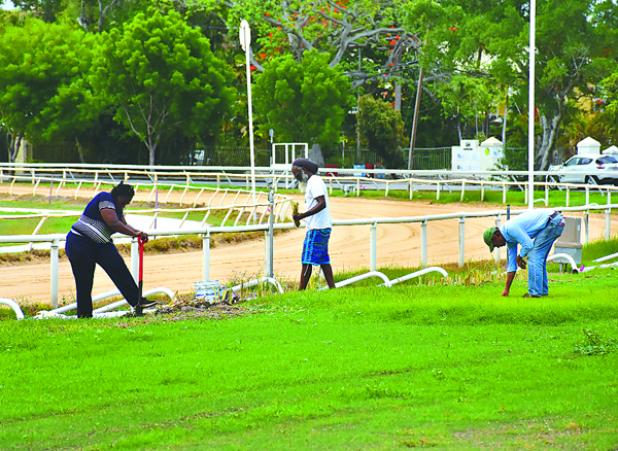 Maintenance workers planting cuscus grass on the inside rail of the track, which will grow into a natural wind barrier.

Yesterday The Barbados Advocate paid a visit to the Garrison Savannah and spoke with Paddock and Track Manager of the Barbados Turf Club, David Archer who, along with maintenance workers, was attending to the track. The manager explained that the soil of the track was practically dead and needed to be revived for the planted grass to grow and flourish.

Archer pointed out a truck loaded with water along with effluent containing molasses from Mount Gay Distillery, which arrived during the morning period to deliver its load to be used to help recondition the soil, by keeping the moisture in.

“That is water and the effluent from Mount Gay, which also helps produce bacteria to help recondition the soil. The soil is in very bad condition,” explained Archer.

The manager also highlighted that as far as he knew, the historic track had never been plowed and redone before and the regrowing of the grass was difficult, especially with the drought conditions affecting the island. He also mentioned that the grass had been planted on three occasions during the maintenance period and there was finally a positive sign of life on the track after the recent rains. Archer stated that the expectation was that by October, the track would be fully green again and of a high standard.

One of the measures being taken to protect the ongoing maintenance of the track is the planting of cuscus grass on the inside rail, which would be a wind barrier.

“The majority of the wind comes from that direction, so what we are doing is creating a wind barrier all around, so when the irrigation comes on, it does not get blown all over the place but goes where it is intended, the track. We are trying to create a wind break that is attractive,” explained Archer.

The manager also highlighted an additional benefit of the newly planted cuscus grass, which was a natural barrier to hinder spectators from rushing too close to the track during big race days and also to block litter from being blown onto the track. He also added that during this vulnerable time, where the grass had been struggling to grow, the Barbados Turf Club had erected signage asking persons not to cross the track.

There has also been the addition of fibres being incorporated into the topsoil of the bends of the track, which would work in between the growing grass, to offer better cushioning for the horses during races and also keep the grass together as the horses move through the turns. (AS)