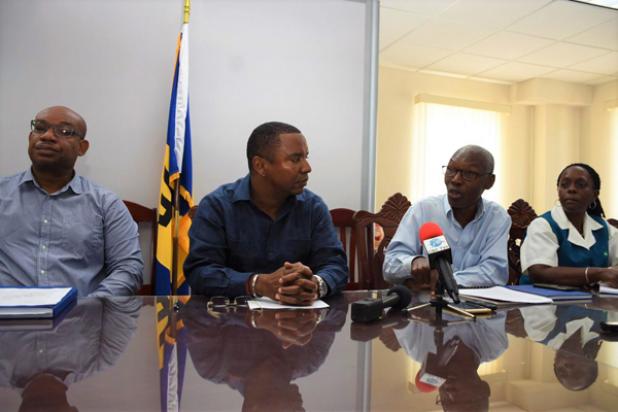 Water solution on the way

AN important cog in the machinery to augment water availability and distribution in the northern parishes of the island was set into motion yesterday.

Minister of Energy and Water Resources Wilfred Abrahams gave the media an update on this new development at his Ministry’s Country Park headquarters where he, along with Keithroy Halliday and BWA Technical Advisor Dr. John Mwansa, shared some of the technical considerations for the scope of work being undertaken.

The Minister explained that the station will improve the volume of water flowing in the taps of residents along Highway 2A, into parishes like St. Thomas: Kew Land and Redman’s Village, Melrose and Welches; In St. Andrew, areas such as White Hill and in  St. Joseph, Chimborazo, Sugar Hill, to name a few.

He cautioned however that with more water going into old pipes, “they are going to burst”. “We expect that we are going to have some bursts in the initial phases as we try to re-balance the water. So we have to juggle between getting enough water down to where it needs to get to without supplying too much pressure that causes a burst.

“Every time you fix a burst section of a main, as you eliminate those leaks, pressure also increases because that area is now fixed and new and you would get bursts further down. We expect this. We are not giving all the water one time; it has to be a staggered process. There are four new pumps to handle this and we are going to start to bring the pumps online one by one as we balance the system to try to get it to work.”

“So we ask the public if they see any bursts, especially in those areas, please contact our call centre or contact us through our call centre, on Facebook or our 836- CALL (2255) or 836 4742. Your assistance in this regard is critical for us. Because we need to know where the weak points are and the faster we can get the bursts addressed, as we bring the system online, the better able we are to deliver the service. And we can’t come up to capacity until we address the teething issues,” he said.

To assist in this effort, the Minister revealed that in addition to the regular BWA staff, emergency plumbing crews will also be on hand to handle these issues as they arise. “So don’t hold back,” he said.

“Give us as much information as possible to help us locate the burst. If you can GPS and whatsapp the GPS coordinates to the cell number that would be great. If not look for the nearest water meter number or look for an electric Light and Power pole number.”

To address the water outages and water shortages, it was revealed that more water from Ionics Desalination plant was commissioned. “So Ionics is now supplying an increased amount of water into our system. This started a couple months ago, but it is not a matter of simply flicking a switch. So infrastructure had to be put in place to get the water form Ionics to where it needs to go.”

This he said, included change valves, installing pumps and upgrading pumping stations. “Because if Ionics at Spring Garden produces twice as much water as it is producing, that is all well and good but that water has to come from Ionics Spring Garden into the same reservoirs that are being affected and then onto the customers who are being affected.”

It was noted that currently upgrades have been taking place at the Ionics Desalination Plant at Spring Garden in St. Michael. At the Ionics Plant, the implementation of the upgrades is taking place in two phases and phase two is presently underway.

As a result, it is expected that a number of pumping stations and reservoirs will be impacted. The BWA would therefore like the public to take the necessary steps to minimize the impact to themselves by storing water to help with their water needs while the work is ongoing. (JH)