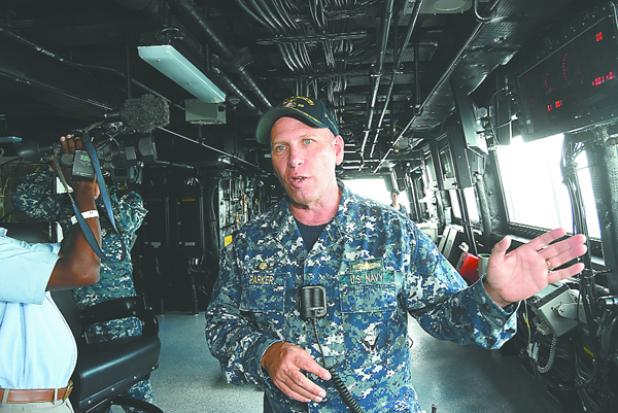 Wed, 08/31/2016 - 12:42am
By:
Janelle Husbands
THE brand new, technologically advanced USS John P Murtha (LPD 26) is currently in Barbados as part of its maiden voyage.
Persons travelling along the Spring Garden Highway can look towards the Bridgetown Port and see the massive amphibious landing ship, which arrived yesterday morning and will be leaving the island by the end of the week.
Commanding Officer Captain Kevin J Parker showed off the spectacular multi-mission vessel, which is carrying a crew of close to 400 hailing from the United States as well as 16 other countries. Approximately 20 per cent of the crew are female.
Captain Parker explained that the ship, which made its first stop in Jamaica, came to Barbados’ shores with the objective of meeting and expanding partnerships with Barbados’ armed forces, carrying out community projects, while giving the sailors some well-earned rest and relaxation.
It took four years for the vessel to be built, before setting sail from the builders’ yard in Mississippi.
The Captain described the ship as America’s 911, or an on-call emergency force, which on its own is a defensive ship, but can carry out 800 marines when embarking on a mission. It has the capability of dispatching Marines in air cushion or conventional landing craft, or by helicopters and MV-22 Osprey aircraft. It supports amphibious assault, special operations and expeditionary warfare missions. It has a fully operational hospital, three gyms and is currently carrying over 100 of the crew’s personal vehicles for easy access when they reach the vessel’s home port.
According to Captain Parker, “The ship’s primary mission is to embark our marine brothers and sisters, using them to perform whatever missions are asked for us. It is a multi-mission ship, that can range from a wide number of things: humanitarian assistance or disaster relief mission, enforcing or promoting maritime security, doing exercises and working with our partner Navies around the world or responding to some military crisis.”
The ship has a number of spectacular features including its advanced communication capabilities. “Almost all of the engineering systems, sensors, weapon systems, are all controlled over one computer network, the Ship’s Wide Area Network. We have a lot of satellite communication capability, connected to folks around the world all the time. That makes it a unique ship and very effective in whatever mission we are asked to do.”
Finished just over three weeks ago, the USS John Murtha will be officially commissioned in October in Philadelphia, Pennsylvania. (JH)