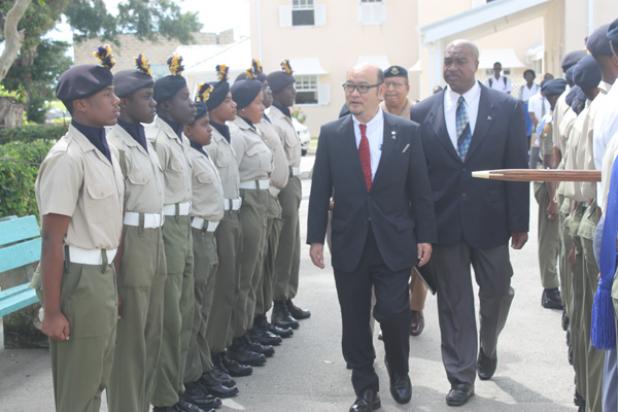 Sixth form students of The Lodge School have been encouraged to consider options beyond Barbados’ shores after secondary school.

Parliamentary Secretary in the Ministry of Education, Science and Innovation, Senator Harcourt Husbands made this suggestion as he addressed pupils yesterday. On this date, Japan’s Ambassador to Barbados His Excellency Teruhiko Shinada paid a courtesy call to the Society, St. John educational institution.

“The entire Asia-Pacific area, I think we and I think that you young students have to see a future where this becomes part of your horizon; the possibility of travelling and living in Asia, learning Japanese and Chinese…”

He continued, “There are tremendous opportunities for you young people to broaden your horizons and think of your future not only in terms of Barbados but also in terms of the entire world. This visit this morning, I think would lead and open your senses to all these possibilities that exist.”
Husbands during his remarks lauded the Ambassador for visiting the school. He also told the gathering in the hall that their school was specially selected.

“From the time I have been at the Ministry of Education, I have not known of an occasion when an Ambassador from a foreign country has requested a visit to a secondary school in Barbados and the fact that the Ambassador of Japan [in Barbados] has requested that he visit not only any school in Barbados…, but it is his request that he visited The Lodge School, I think that this is a single honour to the staff, the board and you, the students of this historic and noble institution.”

During his visit, the Ambassador of Japan in Barbados took a brief tour of the school and viewed the exhibition which forms part of the school’s Black History Month celebrations as well as viewed and sampled dishes that were been prepared by the Home Economics students.

Shinada, who took up his post four months ago, stated it was his “first time” visiting a local school. He not only presented tokens to the Principal of The Lodge School, Winston Dowrich but offered words of advice to the sixth formers.

“My message to you is: Be proud to be a student of The Lodge School, work hard but enjoy your school life and make a lot of good friends. You can because you think you can.”