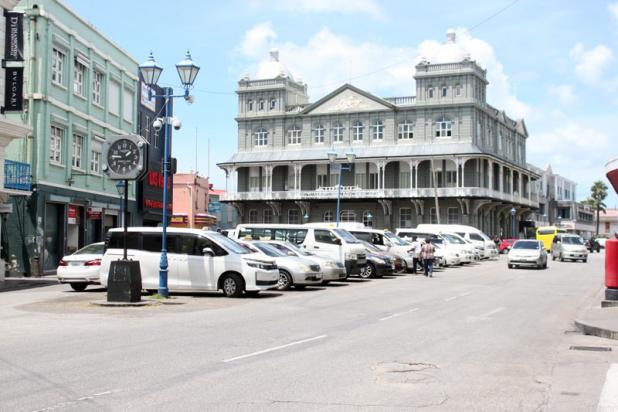 The stand at Lower Broad Street was full as there was not much work for taxi men yesterday.

Taxi men have their say on COVID-19

As COVID-19 expands it influence across Barbados, citizens from all walks of life continue to feel the pinch as the island tries to forge a way forward.
With one of the most recent talking points being the protection of Barbadians as it relates to public transportation, The Barbados Advocate took a trip to the Lower Broad Street Taxi Stand to have a word with some of the operators there.

With the interview taking on a life of its own and becoming something more akin to a conversation at a neighbourhood rum shop, one of the first sentiments expressed by the most co-operative of the group was that they were having a hard time with the situation and hoped that Government could intervene. “Everything rough! We ain’t getting no money. We need Mia to give the taxi men a little something – a little $2000 to run we over. We need some sort of grant or something,” he said.

With the Alliance of Owners of Public Transport handing down a new set of guidelines to direct practices in a bid to ensure the health and safety of operators and commuters, one of them mandates that taxis carry up to only three passengers in the back with none in the front passenger seat. One of the operators said that he had plans of taking out his seat while another said that he did not think that it was safe to have passengers out of his line of sight. “People riding in the back is more dangerous for us, a man could shoot you in the back of your head, and that happened already in Barbados. We want the passengers next to us so that we can see what they are doing,” it was pointed out.

He did have what he saw as a remedy for that situation as it related to the other Public Service Vehicles. “My suggestion is, let the men sanitise the passengers before they get in the vans and call that Wally – just sanitise them. There is no need to reduce the number of seats or nothing so. People want to get home,” he said, while a second operator saw the silver lining and said that it could provide a new line of businessman. “That means a man can get a little hustle now. If a man gets a spray can and stands up down there, if you want your van sanitised – five dollars.”

Although the COVID-19 response in Barbados has not yet reached a stage where such was necessary or economically possible at this point, one of the drivers suggested that more be done to protect the taxi men who were front-line workers in the face of the pandemic. “I believe that there should be something set up in town near the taxi stands, that if we want to go and test ourselves because we are the first to get contact and we would be the first to spread it. The taxi men should have something instead of having to go to the hospital or something, there should be a testing area nearby,” it was further pointed out.

Noting that there were similar set-ups in more developed countries across the globe who had much more advanced situations for the novel Coronavirus, he went on to say that the powers that be in Barbados needed to see what was happening in those countries and stay ahead of the game. “We have to get to that stage because we have to learn from them. The stage they we are at, we need to keep ahead. We should be three weeks ahead of them,” he said. (MP)