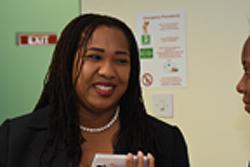 By:
Peta Rowe-Forde
Some managers and supervisors from across the island will be newly equipped for their positions after coming through the Supervisor Training Productivity Best Practices programme.
The term “Supervisor” is used throughout the initiative to encompass both supervisors and managers as the council is of the view that managers too, do some level of supervision.
Giving some insight into the annual programme, Karen Collins, Training and Development Officer of the Productivity Council, explained that it is geared towards the often-overlooked humanistic aspect of such leadership positions.
“The whole idea is to sensitise supervisors and we chose them because they are very skilled and good at their job, but then you find when they get into the training, they have problems because the people side is the more difficult side for them. So this training really focuses more on the people side… things like leadership and conflict resolution, team work and performance, management, communication, and those types of things will be discussed throughout the session,” stated Collins.
The session will be active for two days, and as usual, it will be run one more time later on in the year. This, according to Collins, is because the programme is very important and it usually has a lot of interest shown towards it. Moreover, she stated that, “Attendance has dwindled because of tight financial constraints, but we still want the training to be available so we implemented measures, such as reducing the prices.” Collins assured that this is not to say that the programme is of any less quality, but it shows that the programme is a part of their mandate to “get out there” and impact the public to make organisations more productive.
Further, Collins noted that the sessions often get great reviews. “Some people call back and say that they had a really good time and it has been impactful due to the fact that it’s training. It sometimes takes a while for certain habits to be broken, though definitely, the way in which they see themselves in the organisation changes. They understand that there are more things that they can do,” emphasised Collins.
While these sessions usually capture the attention of businesses in the private sector, some public sector entities are participating.
“There is a combination here today… usually we get a lot of private sector but we are very pleased that there are a few public sector in this session as well.” The two day sessions are facilitated by Shawn Callendar and Karen Collins.