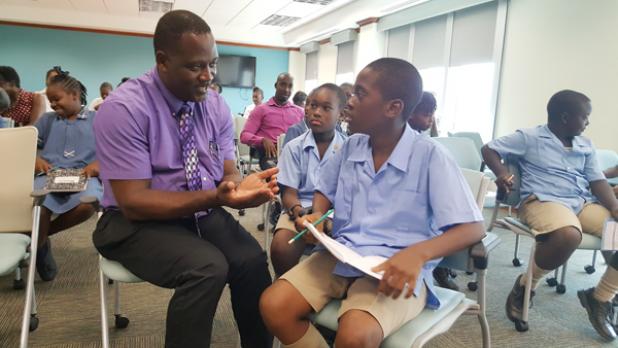 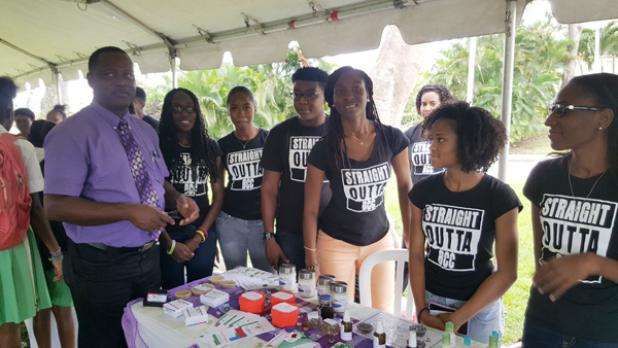 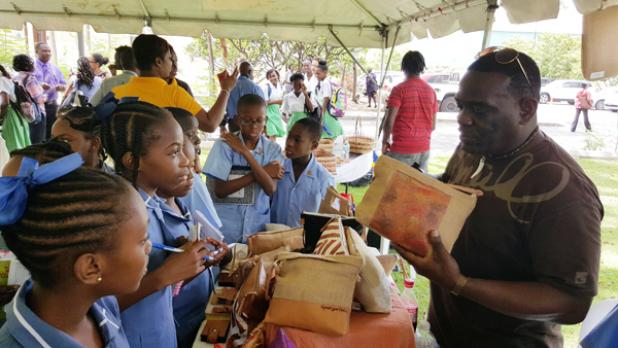 These primary school students showed an interest in the handbags on display at this booth set up during the CAIPO Open Day.

Students encouraged to respect intellectual property of others

Minister of Industry, International Business, Commerce and Small Business Development, Donville Inniss, delivered this message to students of Eden Lodge Primary, Lester Vaughan Secondary and the Alma Parris School, as he engaged them following their tour of the Corporate Affairs and Intellectual Property Office, on the 7th Floor of the Baobab Tower in Warrens, St. Michael.

“This year, we focused quite a bit on the digital aspect of intellectual property. I will say to you, that here in Barbados, we have a duty to help those who use their intellectual power to create works. We have a duty to safeguard and to protect them and ensure that they get all that is due to them, and it is an area that we sometimes don’t pay a lot of attention to,” Minister Inniss pointed out.

“Any of you may want to be a musician, Calypso King or just write songs, or sings songs... whatever. You need to appreciate the power and the wealth that lies in what you produce. We tend sometimes to only reflect on these things when one of the top singers in the world passes away.

“Like this week, Prince died… and I read an article last night that said his estate was worth about 300 million US dollars. Now that is what his estate is worth... what he was last worth,” Inniss told the students.

“And that’s why we say that we must protect people’s intellectual property and the rights that are enshrined in it,” he continued.

“I know often times we want to go online and download free music, download videos... remember that it’s somebody’s hard work that went in to producing that, and they must be paid, they must earn a living” he added.

Minister Inniss acknowledged that here in Barbados, the cultural industry is being pushed to a higher level. To this end, he encouraged students wanting to get involved in the cultural industries, to see it as a viable sector in which they can earn a living.

“So don’t feel that you cannot be in one of those other areas as well,” Minister Inniss told the students. (RSM)