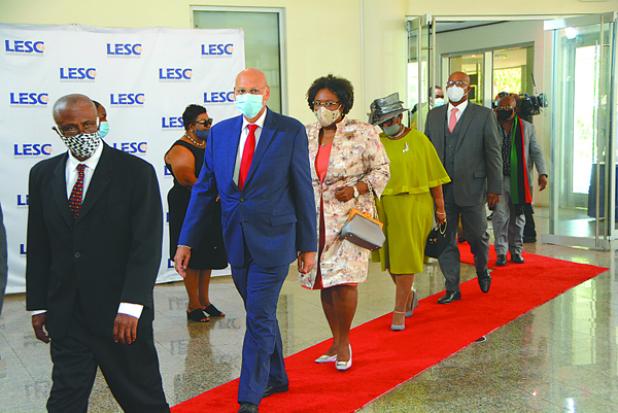 Splendid ceremony for historic opening of second session of Parliament

All eyes were on the Lloyd Erskine Sandiford Centre (LESC) for Tuesday’s opening of the Second Session of Parliament. This occasion was a historic one as it was the first time this venue was used for such.

Ahead of the prompt 10 o’clock start, guests, which included diplomats, ambassadors, High Commissioners, Consuls General, Chargé d’Affaires and Honorary Consuls as well as government Senators and Members of Parliament, arrived one by one as well as in small groups for the proceedings at the LESC.

Many of the ladies who attended the day’s Sitting were superbly attired in their designer dresses. Several wore fascinators and masks, which complimented or matched the colour of their outfits. Salmon, shades of blue, yellow, red and green were chief among the colours of the dresses worn.

The gentlemen on the other hand opted for shades of black, blue and grey suits. Some wore three piece suits while others wore the more classic fit suits.

Two separate entrances were used by arriving guests, who swiftly made their way inside. The Prime Minister, Members of Parliament and Senators entered through the glass doors near the western carpark. Meanwhile, the LESC’s main entrance was used by all other individuals. On the inside, the Frangipani Room was used for the Senate Chamber while the Flamboyant Room was utilised for the Chamber of the House of Assembly.

Around 9:50am, the Governor General Dame Sandra Mason arrived for the day’s joint Sitting of both Houses. She was given a Royal Salute after which she inspected the Guard of Honour, which was led by Guard Commander, Captain Jamal Samrodia.

This was the first time that the Guard of Honour comprised of 30 members of the Barbados Regiment along with the Colour Party – an additional five members. The Barbados Defence Force’s Sargeant Major, Master Chief Class 1, Austin Howell explained to the media the reason for this.

“The significant thing about the Guard of Honour this morning is that normally the Governor General, she is allocated 96 men for her Guard of Honour. However because of the COVID-19 restrictions, we are only allowed to space the soldiers six feet apart. So in order to get the Guard of Honour fit in the specified area, we had to reduce it to 30 men as opposed to 96.”

Following her inspection, Her Excellency Dame Sandra proceeded through the LECS’ main entrance to go to deliver the Throne Speech. She was received by the President of the Senate, the Speaker of the House and the Sargeant-At-Arms upon entering.