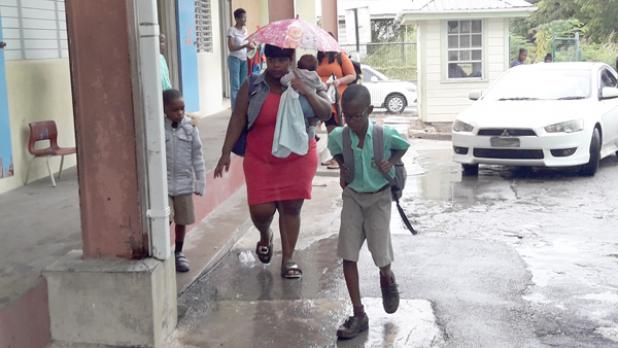 Smooth start for schools after one week delay

IT was the first day back to school yesterday at several educational institutions where the opening was delayed until this week.

The late start to the Michaelmas term for these schools was due to the incompletion of construction and rehabilitative work. Following this, school plants had to be industrially cleaned, materials sanitised, furniture repositioned, and school meals serving areas re-equipped before pupils could return.

Three primary schools which opened their doors to begin the term yesterday were Milton Lynch Primary, Wilkie Cumberbatch Primary School and the Ann Hill School. Pupils from these schools could be seen armed with their rain protective gear as they braved the morning’s heavy showers to ensure they arrived on time and as dry as possible.

Speaking to The Barbados Advocate, Principal of the Milton Lynch Primary, Everton Briggs, said the first day got off to “a smooth start” and no complaints were received up to that point.

Sharing similar remarks was Principal of the Ann Hill School, Emelda Bell, who reported, “All is well. Have no major concerns and I am happy to be back.”

At the Wilkie Cumberbatch Primary, parents who were in the carpark chatting, stated they were elated that necessary refurbishments were completed and students could return to the classroom.

One mom whose son is in Class 4 and daughter is in Infants B said she wasn’t pleased about the delayed opening, but she is “overjoyed” and “elated” that her children are back in the classroom.

Another mom said her daughter and son were “happy” and “excited” for the first day and so was she.

“The extra week, they were a bit happy that they had more time on vacation, but this morning the excitement was built up and they are happy to be back. For me, I am happy too that they are back.”

Though classes are ongoing at most public schools across the island, there are two schools which are not ready to welcome the entire student body. In a press release, the Education Ministry stated that Class 4s at St. John Primary School and Eagle Hall Primary School would attend classes at these institutions yesterday. However, all other classes will report for school at St. John Primary on Wednesday, September 18, while at Eagle Hall Primary – all classes will return to school Monday, September 23.