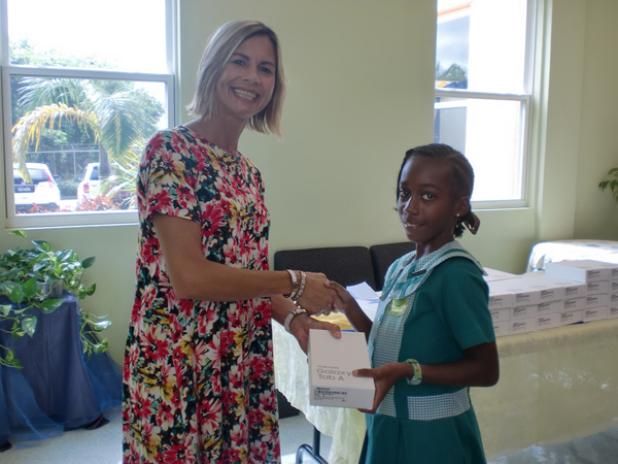 Christina Truss, Founder of the Aron and Christina Foundation, presenting Sherya Marshall, a student of St. Bernard’s Primary School with a Samsung tablet. 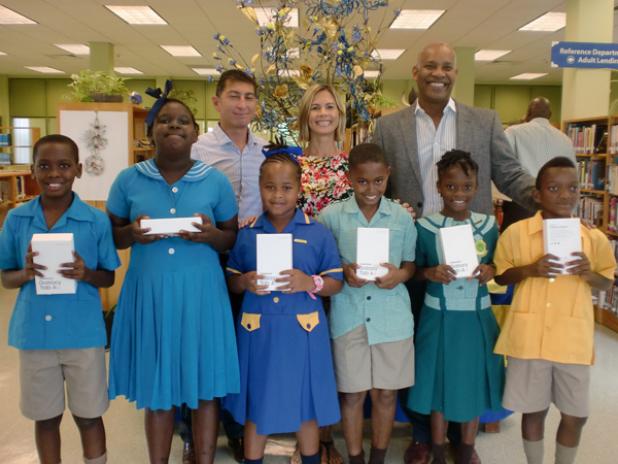 Aron and Christina Truss, alongside Member of Parliament for St. Joseph, Dale Marshall with some of the students of St. Joseph, St Elizabeth, and St. Bernard’s Primary Schools who received Samsung tablets. 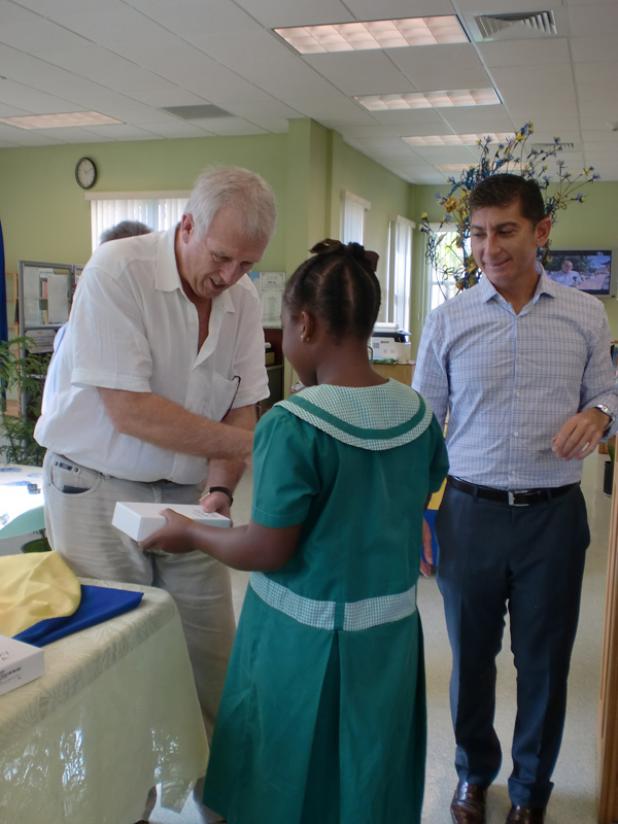 Donor, Nic Williamson, assisted in the presentation of tablets to students as Aron Truss, Founder of Aron and Christina Foundation, looks on. 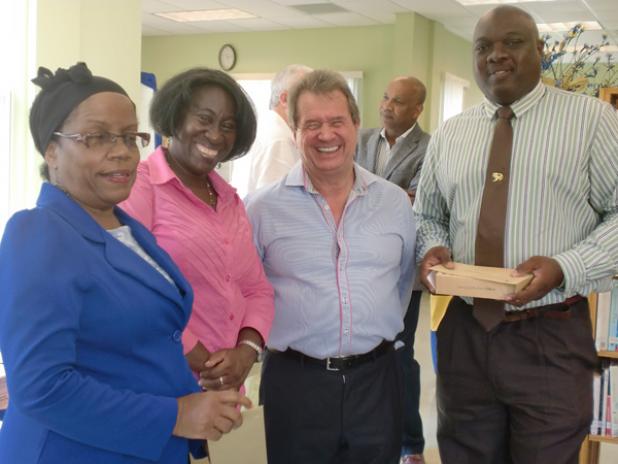 Sun, 12/04/2016 - 12:00am
Class three students of the three primary schools in St. Joseph were presented with Samsung Tablets by the Aron & Christina Foundation, on Friday.
The registered charity which was formed by Aron and Christina Truss in 2009, with the purpose to promote and facilitate children’s education at the primary and secondary levels in Barbados, presented 70 of the devices to the students of St. Elizabeth, St Bernard’s and St. Joseph Primary Schools, during a short ceremony held at the Public Library located in the Eric Holder Municipal Complex.
Aron Truss took the opportunity to thank Nic Williamson, who has once again made the presentation of tablets to those St. Joseph schools possible.
“Once we add a school to the tablet project, we do want to return every academic year and add the new students with an aim of improving the academic performance of the school. However, returning to schools, adding the new class three’s, would not be possible without us being able to secure donors like Mr. Williamson, who has very generously donated the funds to pay for the tablets this year and the last few years.”
Truss revealed that the Foundation will be distributing approximately 600 tablets this academic year 2016/2017. He said that Class three was selected because they feel that these students are old enough to handle the responsibility of taking care of a tablet and will have it to assist them with preparation for the Common Entrance Examination.
“We hope you will use them for your academics but we also realise that you will use them to play games and that is alright. Christina and I are aware of that, and we actually encourage that. Because even when you are playing games and do other non-academic activities, you are still learning skills that you are going to need to have when you are older and get into the workforce. Actually, by the time you get to our ages there are going to be very few jobs you will be able to do without having some technology experience and knowledge,” he pointed out.
The Aron and Christina Foundation is also encouraging the teachers to use the tablets as a teaching tool and incorporate their use into the curriculum. In light of this, one extra tablet per Class was provided so that teachers will also have a tablet in the classroom to assist them with their teaching.
Member of Parliament for St. Joseph, Dale Marshall, thanked the husband and wife team as well as Mr. Williamson for their continued commitment to the students.
Also, during the ceremony, owner and head chef of Nishi Restaurant, Paul Edwards, made a special presentation of dinner vouchers to the Principals of the three schools. (TL)