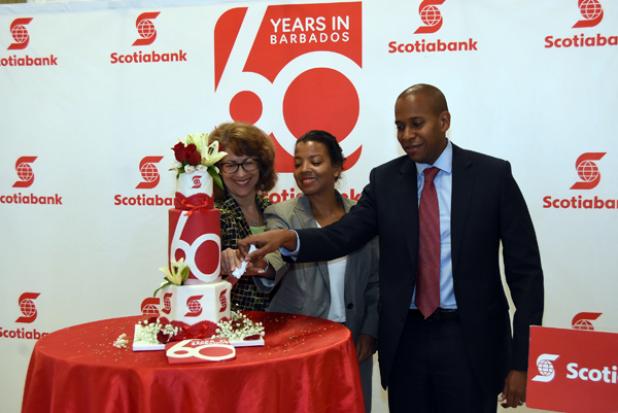 Government has created a new policy framework for micro, small and medium enterprises in this country.

Word of this has come from Minister of Industry, International Business, Commerce and Small Business Development, Donville Inniss. Addressing those attending the launch of Scotiabank Barbados’ 60th Anniversary Celebration at the bank’s Broad Street branch yesterday morning, Inniss announced that his Ministry is about to roll out the new policy, which includes utilising philanthropy to access business financing.

With that in mind, he commended Scotiabank for its work with the small business sector, especially in light of the announcement yesterday by its Managing Director, David Noel, that the bank, as part of its anniversary celebrations, is donating $60 000 to the Cherry Tree Trust, which provides start-up financing for entrepreneurs. This, he said, is yet another way the bank is helping small businesses, as he spoke to the Bank on Me Programme that is currently running. According to Noel, Scotiabank strongly believes that one of the areas that can help grow the economy is small businesses.

“I know the Minister and I have had discussions on whether banks are equipped or structured to be lending to entrepreneurs or start-ups, and I think the answer there is no. However, that doesn’t mean we don’t have a role to play in facilitating the creation of an environment that encourages start-ups to succeed and encourages entrepreneurs to take the plunge into business and to get going,” he said.

His comments came as he noted that throughout the six decades Scotiabank has been in operation in Barbados, they have had a reciprocating relationship – as they have contributed to the country’s success, they have also benefited from it. The bank boss made the point as he maintained that no financial institution can grow if the economy is not growing, and so he said their success is inextricably linked to the communities in which they operate. To that end, he gave the assurance that the bank takes their corporate social responsibility seriously and they are willing to give back.

“We’ve all had our challenges and it has not been easy over the years, we’ve had to adapt, we’ve had to make some tough decisions to structure our business in a way to make us more efficient and if we want to continue to be a strong financial institution we know we have to continue to change… The Barbados economy has had its ups and downs, [but] we believe in Barbados, we believe the underlying economy, the underlying infrastructure, the educated population we have here will make us successful in the long-term and we will overcome those challenges,” the managing director stated. (JRT)