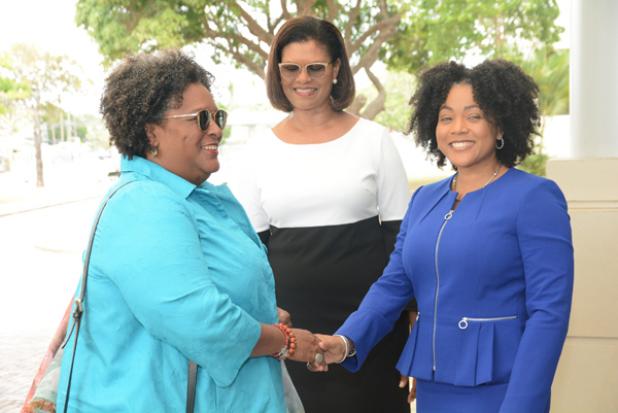 Prime Minister Mia Amor Mottley is not getting into any public discussions on the future of regional airline LIAT at this time, but has expressed this country’s commitment to “reliable and affordable” intraregional travel.

“There must always be reliable, affordable access for travel in the region, as there must be nationally, and I can assure you and the country we’re working on this every day. But you also have to take the reality of an existence as you find it, and then determine whether the modality that you have is the best mechanism by which to deliver on that objective,” she told those attending the Barbados Employers’ Confederation’s annual luncheon yesterday afternoon.

Responding to a question about the cash-strapped regional airline and what progress was being made on that front, the Prime Minister explained to the packed room at the Lloyd Erskine Sandiford Centre that the discussions about the airline are at a delicate stage and she would remain mum about the details for the time being.

“I have been in public life long enough to know that when discussions are at a sensitive stage, that the worst thing you can do is up the ante by trying to have some kind of public expression, that may well lead to hardened positions and an inability for people to negotiate in good faith,” she stated.

PM Mottley made the point while promising that her Government, would at the “appropriate time”, once discussions are concluded with all the stakeholders, update to the country. The PM, noting too that Barbados is not the only player, contended that this is a fact that her Government is quite mindful of, while reiterating Barbados’ commitment to facilitating regional travel at all levels.

“Suffice it to say, that by whatever means we choose, whether existing or other, there will be a commitment to providing affordable, reliable air travel between those in the Caribbean, because without that we accept that there would be a serious constraint on our people. But there are multiple ways of being able to do that in the context in which we operate,” she stated.

Her remarks have come just days after Antigua and Barbuda indicated it had sent a formal offer to Barbados to acquire its shares in the airline, but Barbados is yet to make an official statement on the matter. Earlier this month the Antigua-based airline increased the number of shareholder governments by one, with Grenada joining St. Vincent and the Grenadines, Antigua and Barbuda, Dominica and Barbados.

The decision by Grenada to join the shareholder group came a few weeks after the shareholder governments asked other Caribbean governments to provide financial assistance to the airline to help address its financial woes. At the time of the announcement, Grenada’s CARICOM Affairs Minister is reported as saying that that country’s decision to become a shareholder was based on the importance of LIAT to the country’s revenue earning capacity and economic development.
(JRT)