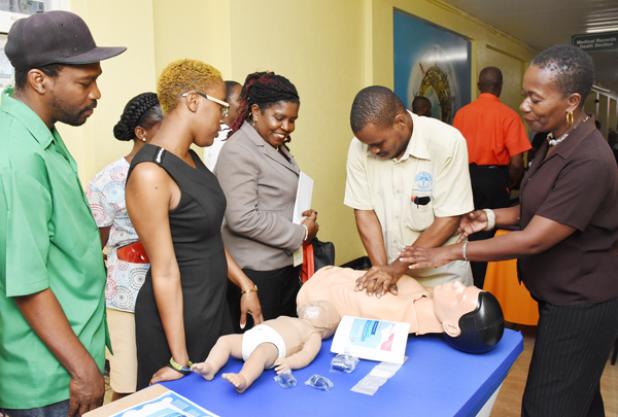 AS a part of their annual celebrations, the Queen Elizabeth Hospital (QEH) opened their doors to the public to take part in their Open Day event.

Speaking with the media yesterday morning, Lyn-Marie Deane, Communications Specialist at the QEH, explained that they held the Open Day every year as a part of their week of activities. She noted that there were approximately 20 booths for persons to interact with.

“The idea behind it is that we have a lot of valued partners and so we give them the opportunity to come into the hospital and interact with persons here at ground level. It is normally held within the week that we celebrate our birthday. The 53rd anniversary was yesterday, so within this week, starting Sunday to Saturday, we usually have a whole heap of activities,” she said.

“We started on Sunday morning with a church service that was well received; we had a good turnout from staff and board members. The service was fitting because the sermon was about the rendering of services to others and that, as you know, is very in keeping with what the QEH does. So following that, on Monday we had the recommissioning of the hospital chapel and yesterday [Tuesday] we had the cake-cutting celebrations.”

Deane revealed that later on that day, they had a MOU signing between the QEH and the Cancer Support Services (CSS).

“The MOU entails quite a number of things; one of these things is that they would be allowed a greater presence here at the hospital, which includes them offering services along the lines of counselling. So persons who require counselling, who have been recently diagnosed or during the course of their treatment, the CSS would be able to have access to the hospital on a 24-hour basis,” she said.

“The CSS also donated quite a number of sheets to the hospital. They have been constant donors actually, as they have adopted ward C12 and made improvements to the ward. They also installed a sign to reflect the new visiting hours.”

Deane went on to reveal that they had a number of activities planned for the rest of the week, including a staff wellness programme, intended to take place today and Staff Appreciation Day, where staff would have access to manicures, pedicures, facials and massages. To end the day, she noted that they planned to have an after-work lime.