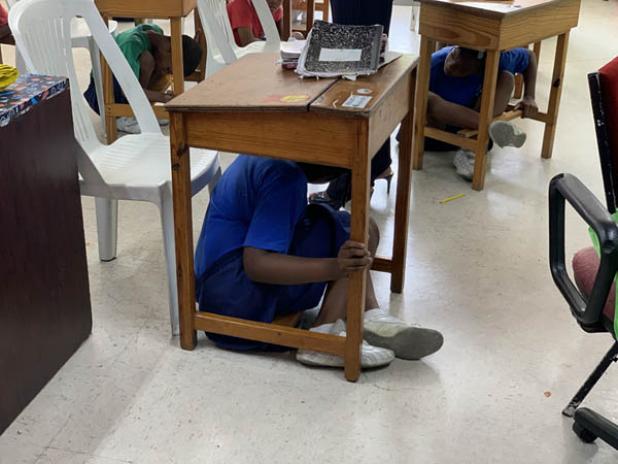 The students of People’s Cathedral Primary School as they took part in the event.

As part of National Earthquake Day, students and staff of the People’s Cathedral Primary School took part in a “Drop, Cover, Hold On” drill to raise awareness.

Speaking with The Barbados Advocate following the drill, Principal of the institution, Heather Bryan, stated that they took the request from the Coastal Zone Management Unit to participate in the drill, seriously.

“For us we took the National Earthquake Preparedness Day very seriously; we prepared our teachers and the teachers in turn prepared our children, and so by ten - since we use the bell system – we had three short blasts. In the area that the sound couldn’t reach we had the ringing of the bell by hand and immediately everybody did just that, Dropped, Covered, and Held on!” she said.

“What I would say, my finding, as well as the majority of us here recognised that the children did what they were supposed to do but with it came a lot of screaming. I find that’s something that children do, for instance they’re outside, they feel the rain, they run for cover but they’re screaming, so that was carried out.”

She believes that since yesterday was their first day carrying out a drill that was different to their fire drill, they have to help the children understand the seriousness of the simulation, as you never know when an earthquake could happen in reality.

However, she was proud to note that the children did as they were told, which for her, was paramount.

She added that she was grateful for the earthquake drill, noting that they normally had fire drills, but with the possibility of Barbados feeling an earthquake or tremors, she believed this drill was important.

“We usually have the fire drill, and that would have been good for some time ago, but we recognise now that it is not only fire, now there is the threat of earthquake, or shooting within the schools and so on, so we recognise that we now have to incorporate all of the possible scenarios into the drill,” she said.

It is against this backdrop that Bryan noted that they would be adding the earthquake drill to the list of drills they regularly carried out with their students at the school.