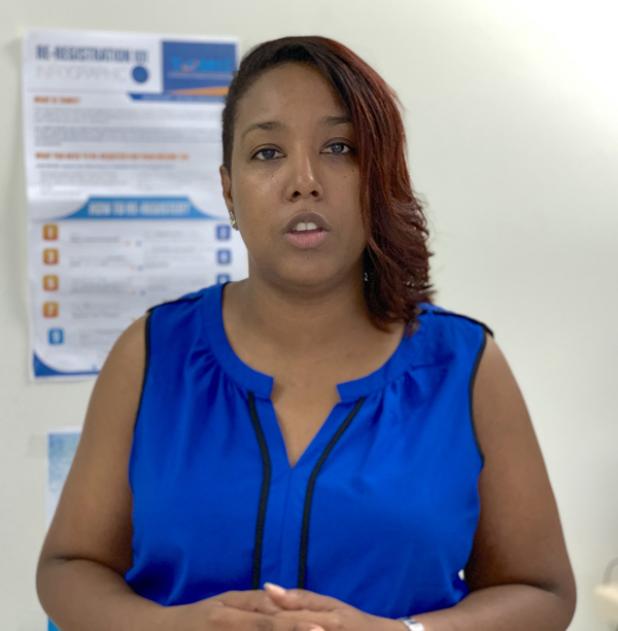 Carolyn Williams-Gayle, Manager, Communications and Public Relations, BRA, speaking to The Barbados Advocate during a Tax Clinic which was held at the Treasury Building yesterday.

THE Barbados Revenue Authority is aware of the issue in relation to the late penalty application and noted that they are working quickly to have the problem solved.

Word of this came from Carolyn Williams-Gayle, Manager, Communications and Public Relations at the Barbados Revenue Authority (BRA), as she spoke with The Barbados Advocate yesterday morning.

“One of the issues that did come up, and we are aware of, is that there is an issue relating to the late penalty fee being applied to those persons who would have applied after the April 30th deadline for income tax filing and our team is working with the consultants to complete the update of the system to reflect the extension in the deadline,” she said.

“So as soon as the updates have been completed, the persons who filed would have seen the penalty added to them that will be reversed.”

Williams-Gayle went on to note that every year around tax filing season, the BRA, as part of its outreach programme, hosted Tax Clinics to assist taxpayers with filing. She explained that this year was especially important as they have transitioned to a new filing system, TAMIS, which means that people are going to need as much help as possible to understand the filing system.

She stated that this week, they are hosting Tax Clinics across Barbados, in the Treasury Building, Rices Resource Centre, their Holetown location and Speightstown Resource Centre.

The Tax Clinic that had been planned for the Valley Resource Centre needed to be postponed until next week.

“We had to postpone the one at Valley for another week since we have three more weeks for the month, as we have extended the filing deadline to May 31 for 2019. This week, we have seen an increase in the persons at the Treasury location during the morning period, but that has tethered off,” she said.

Additionally, “during the first series of tax clinics last week, we have seen about 300 people passing through the centres”.

As with change, Williams-Gayle expressed that the new tax system would take some getting used to. She explained that their aim was to make the system more self-service, and allow persons to see their information while making it more interactive. (CLF)