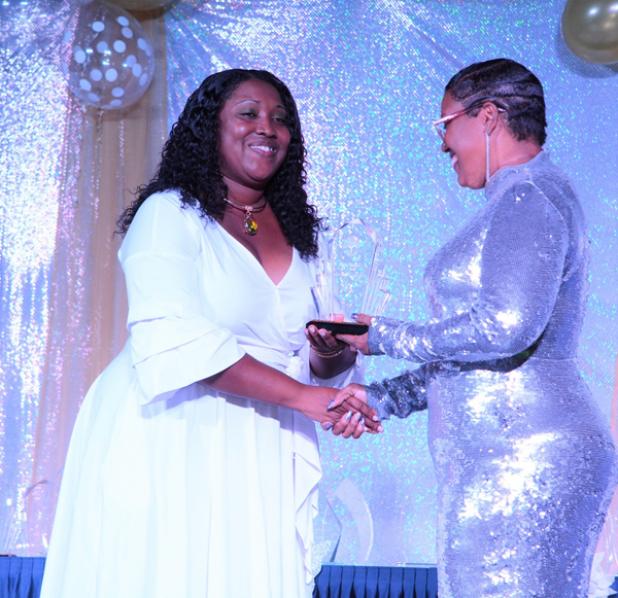 Chairman of the Board of Management of the Queen Elizabeth Hospital (QEH), Juliette Bynoe-Sutherland (right), presenting the Chairman’s Award to Safiya Wilkinson, Senior Internal Auditor at the QEH.

Over $40 million paid to QEH

Chairman of the Board of Management of the Queen Elizabeth Hospital (QEH), Juliette Bynoe-Sutherland, has confirmed that year-to-date the Health Levy paid by Barbadians has yielded $40 196 938.00.

Prime Minister Mia Amor Mottley announced the introduction of the 2.5% Health Service Contribution to be implemented through the National Insurance Scheme (NIS), with the view of generating revenue to fund the operation of the island’s public hospital. This measure came into effect on October 1, 2018 and was expected to raise $50 million in one fiscal year.

Bynoe-Sutherland, who was at the time addressing the 2019 QEH RESPECT Awards Ceremony at the Lloyd Erskine Sandiford Centre (LESC) on Saturday night, expressed appreciation to the tax-paying public and the NIS for efficiently collecting and dispatching the proceeds to the QEH on a monthly basis.

She also revealed that the hospital has strengthened its financial management, reporting and internal auditing, completed a comprehensive stock count and will engage auditors through to 2021, so that external audits outstanding since 2011 can be brought up-to-date to this financial year.

She said that the QEH has cleared the outstanding debt to local and overseas suppliers through the BERT programme.

Moreover, seeking to ring-fence the QEH from the wider cuts affecting the public service, the Chairman pointed out that the hospital has not laid off permanent staff and has in fact increased temporary contracts from one year to two years, to give staff more security of tenure and enable them to get loans from institutions.

“We know it has been hard, as we have had to reduce or eliminate overtime in some areas and decreased the number of relief staff. But we do this all so that we can maintain our permanent staff and we thank everyone for their commitment and sacrifices,” Bynoe-Sutherland expressed.
(TL)