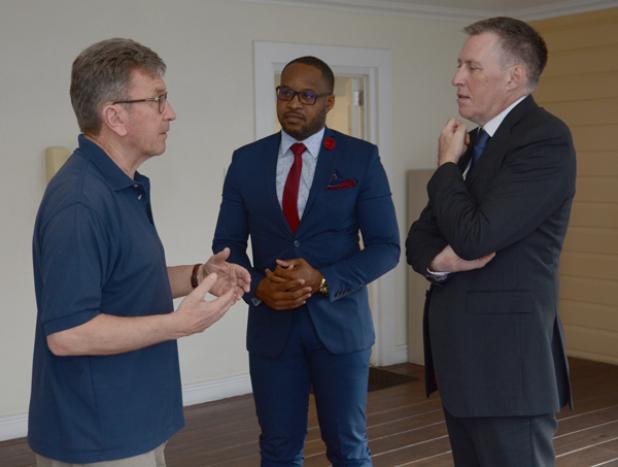 Military personnel are preparing themselves to better operate in this technology-driven society.

In collaboration with the United Kingdom (UK) Ministry of Defence, officers of the Barbados Defence Force (BDF) have embarked on a four-day Media Operations course, which will expose them to the necessary tools for effective communication as well as build awareness on the importance of media in the operative environment.

Addressing the opening ceremony yesterday at BDF’s Hodgson Hall Conference Room, St. Ann’s Fort, The Garrison, Deputy British High Commissioner Craig Fulton emphasised that virtually all operations these days are conducted under the spotlight of the media, as the advances in technology has brought information to a much wider audience, and almost virtually in real time.

“Alongside increasing accessibility and speed of traditional media and satellite broadcasting, most people now have the ability to access information directly, almost instantly via their own hand-held devices, and often without necessarily knowing its pedigree and source, place considerable credence on it.

“The Internet can be used to spread or circulate information and opinion, including rumour and disinformation, with a speed inconceivable a few years ago,” he pointed out.

“All this reinforces the need for a pro-active information stance with a global reach. Consequently, there is a need to be proactive in ensuring that the presentation of any actions that we take is positive, accurate and credible whilst at the same time countering attempts to undermine public support.”

The Deputy High Commissioner therefore revealed to the participants that they will benefit from a range of presentations, exercises and visits to media outlets, and consider why it is important to address and view media operations as an important core component of the current operating environment.

“This course will help you examine the impact of social media on traditional media outlets and how you can feed in and promote key positive messages to these outlets. You will learn how to plan media events, both in barracks and on operations. And you will experience what it is like to be a spokesman in front of a television reporter… Fostering good relationships with reporters is critical and you will be considering how to look at military events from a journalist’s viewpoint,” Fulton said.

Lieutenant Commander Ryan Alleyne further revealed that the course is part of the strategic trajectory which the Barbados Defence Force has had the honour and privilege to design and lead with its international, inter-ministerial and interagency partners over the past three years.

“It is a trajectory that is intended to help enhance our collective understanding and response capabilities to the risks and threats that exist in the modern global village of the world today and perhaps in the future,” he stressed, noting that thus far, the journey has included a number of programmes to explore strategic leadership and level security matters to strengthen defence, governance, leadership and operational management infrastructures.

Instructor, Colonel (Retired) Ronnie McCourt of the Royal Military Academy Sandhurst, urged the officers to embrace the course, which he described as “very interesting”.

“What I am going to show you this week by use of exercises is how you can better project yourself personally, not just for the media but in your day-to-day work. So, the skills you get this week will not just be about talking to the press, but all the skills will be translatable into your workplace,” he said. (TL)