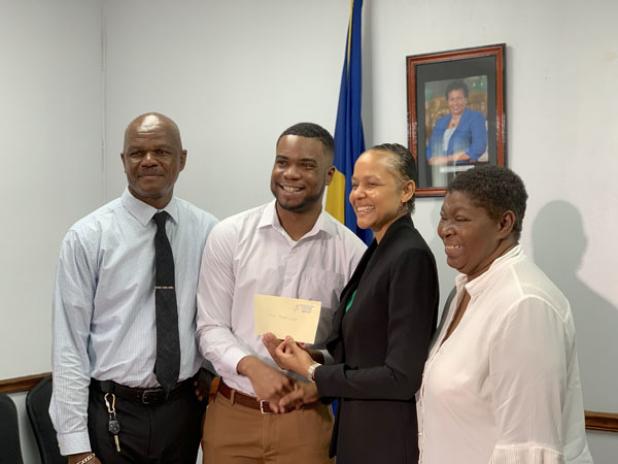 Speaking during the ceremony that took place in the Ministry of Education, Technological and Vocational Training’s conference room yesterday morning, co-founder of the Foundation, Yvette Oxley believed that Yearwood and Lovell truly deserved to win the scholarship.

She noted that Lovell, who was a student of the Milton Lynch Primary was a well-rounded student, with many accolades under his belt, from the first prize of the Ministry of Energy and Water Resources Essay, to captaining his school’s cricket team, and leading them to victory in his zone. Lovell was also his school’s top boy in this year’s BSSEE and will be attending Queen’s College.

Lovell expressed that he knew he was going to win the Secondary School Scholarship, which is valued at BDS$1 000, because he “had a feeling”, regardless, he stated that he was completely humbled to have won this award.

Oxley went on to note that Yearwood was also very deserving of the Hugh Wooding Law School Scholarship, valued at BDS $10 000.

She explained that the scholarship was awarded in two tranches of BDS$5 000, adding that previous students were unable to receive the second tranche due to poor academic performance.

She stated that Yearwood received his first tranche in 2018 and would have successfully performed academically well and would be receiving his second and final tranche today.

He expressed that it “felt great to be awarded the scholarship” as his first year at Hugh Wooding Law School was a little challenging.

Oxley also made an appeal to the general public to reach out to the Foundation while they were having their fundraisers.

“This year we wanted to give a new scholarship but this year was really tough on fundraising; some of our supporters were unable to come out and so we were unable to give the second Hugh Wooding scholarship which a new student should have gotten, but by the grace of God, next year should be a better year,” she said.

She noted that they usually did two fundraisers, a 5K in April and a luncheon in November, and encouraged persons to come out and support. (CLF)