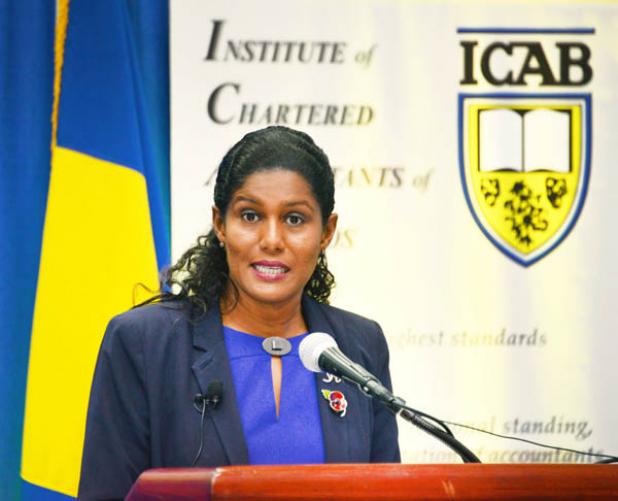 Minister of Labour, Social Security and Human Resource Development, Sen. Dr. Esther Byer Suckoo, as she gave an address at the Students Conference hosted by the Institute of Chartered Accountants of Barbados (ICAB).

Labour Minister lauds ICAB for its work with youth

Fri, 11/11/2016 - 12:00am
The Institute of Chartered Accountants of Barbados (ICAB) has been lauded for the work it has been doing over the years to mentor youth and prepare them for the world of work.
Minister of Labour, Social Security and Human Resource Development, Sen. Dr. Esther Byer Suckoo heaped praise on ICAB, as she made an address this week at a Students Conference hosted by the Institute, at the Lloyd Erskine Sandiford Centre.
“As we countdown to our 50th anniversary, with just 21 days now to go, your theme for this Conference and the Accountants’ Week “Barbados at 50 – Reaching Beyond this Horizon” is most fitting, especially for students approaching the horizon of graduation, and considering what is beyond,” Byer Suckoo said in the presence of ICAB President, Lisa Padmore and ICAB members.
“I congratulate ICAB on this inaugural effort. As ICAB strives to ensure consistently high quality service in the profession. I laud its mentorship programme, which exposes students to the world of work in accounting firms,” Byer Suckoo added.
“ICAB is also to be lauded for its role in society, boldly expressing its views to the Government, public authorities, commissions of enquiry and similar bodies, regarding matters affecting its members, the profession, governance and the public good. In such instances, it can be considered a watchdog, which is vital to a good democracy,” the Labour Minister further remarked.
Noting that one of the major objectives of ICAB is the maintenance of the highest standards of etiquette and ethics among members, which is very important in professional and personal conduct, Byer Suckoo also pointed out that in the Ministry of Labour, there is a programme called the “GIVE Programme”, developed for and taken to workers in many sectors. She meanwhile noted, that while accounting professionals are already on the right path, they can still benefit, by embracing the values embodied in such an initiative.
“GIVE is an acronym for Great Attitude, Initiative, Values and Excellence, and while I am not aware that we have been to any of the accounting firms, the message is of worth and bears repeating here. Hold fast to these, and values such as integrity, objectivity and independence, due care and competence in your tasks and interaction with clients. Their worth will never diminish. Instead, your worth will increase as you demonstrate these,” Byer Suckoo admonished. (RSM)