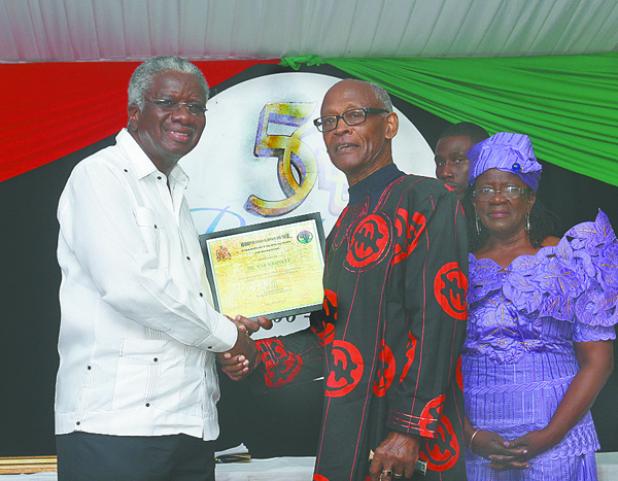 An award of special mention was presented to Valdymer Barnett and Thelma Gill-Barnett by Prime Minister the Hon. Freundel Stuart.

Sun, 04/17/2016 - 12:15am
By:
Marsha Gittens
The debate about obtaining reparatory justice must be kept alive.
Barbados’ Prime Minister the Hon. Freundel Stuart has asserted that though individuals may be of the opinion that talk about slavery was going too far back, this is the stance the Caribbean must maintain.
His comment came during his address at last Friday’s Oshe Emeka Awards ceremony, which was held at Sandalwoods Estate, Hothersal Turning, St. Michael.
The Chairman of the Prime Ministerial Sub-Committee on Reparation further told the gathering that to keep the issue of reparatory justice at the forefront within the region a number of National Commissions of Reparations have been established. These Commissions seek “to sensitise our people to the ingredients of this debate and of course to the need to be part of this struggle to ensure that a lot of the damage that has been done as a result of our slave and colonial experience can be repaired not only by our own efforts, which of course we cannot forsake or ignore, but repaired by those who caused the damage in the first place.”
Stuart highlighted in his remarks that “as a result of the damage that was done to this region as a result of the 200 years of slavery and upwards of 300 of colonialism, there have been some very destructive and debilitating legacies left in this region which continue to hobble our development and our realisation of self as a people of African descent.”
He stated that “the reparatory justice of which I speak therefore is being pursued with all the vigour at our command” by the Caribbean. He also said that “in the areas of education and health and social development, whatever forms that social development is supposed to take, we expect some reparatory justice to be done to the people here in this region.”
During Friday’s ceremony, a number of individuals were recipients of the awards for the invaluable contribution they have made to the island.(MG)