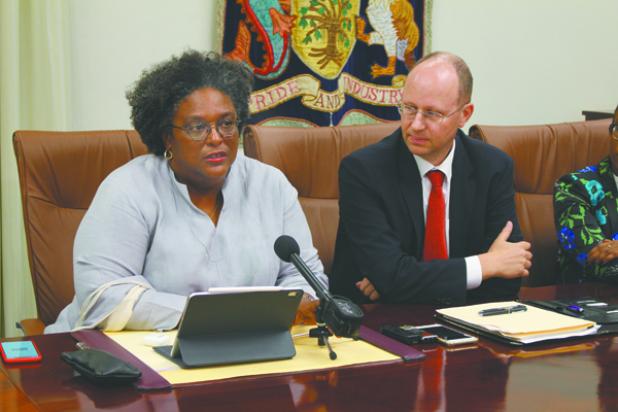 This country continues to make good progress in implementing the Barbados Economic Recovery and Transformation (BERT) Programme, which is supported by the Extended Fund Facility (EFF).

Following a meeting that took place with the International Monetary Fund (IMF) and the Barbados Government yesterday morning, Head of the IMF Mission, Bert Van Selm, reported that a staff-level agreement was reached between the IMF staff and the Barbadian authorities, where they stated that progress is being made on the BERT Programme and Barbados has successfully passed the first stage.

He revealed that following their discussions, it was agreed that US$49 million would be made available to Barbados upon completion of the review in June.

“Barbados continues to make strong progress in implementing its ambitious and comprehensive economic reform programme. International reserves, which reached a low of US$220 million at the end of May 2018, have more than doubled since,” he said.

He explained that the rapid completion of the domestic part of a debt restructuring was helpful in reducing economic uncertainty, adding that the new terms agreed with creditors have put debt on a “clear downward trajectory”.

“All programme targets for the end of March under the EFF have been met. The programme target for Net International Reserves was met by a wide margin, as was the target for the Central Bank of Barbados’ Net Domestic Assets (NDA). The targets for the primary surplus, central government grants to SOEs, central government domestic arrears, and social spending were also met,” he said.

Furthermore, he stated that the Barbadian authorities continue to make good progress in implementing structural benchmarks under the EFF, including those that contribute to an improved business climate, such as a new Planning and Development Act, passed in January 2019; and a Sandbox regime, set up in October 2018.

He added that he believes that continuing open dialogue and sharing of information will remain important in concluding an orderly debt restructuring progress.

Prime Minister of Barbados, Mia Amor Mottley, stated that while she considered it great news that Barbados has passed the first stage of the IMF programme, she thinks it was even more so important for Barbadians to stay the course.
(CLF)