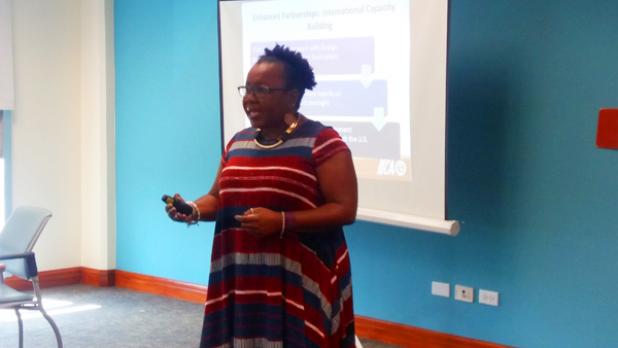 Yesterday, the Inter-American Institute for Co-operation on Agriculture (IICA) continued efforts to disseminate information about new food safety rules in the United States.

Exporters, processors, producers and academia, as well as farmers’ co-operatives, gathered at IICA’s Baobab Tower Headquarters for a seminar on the US Food and Drug Administration (FDA) Food Safety Modernisation Act (FSMA) rule on the “Preventive Control for Human Foods”, which requires that food facilities have safety plans that set out how they will identify and minimise hazards.

FSMA, signed into law by former US President Barrack Obama in 2011, aims to ensure that the US food supply is safe by shifting the focus from responding to contamination to preventing it.

“One of the reasons why this came into being was because of the high incidences of foodborne illness in the United States,” Carol Thomas, International Agricultural Health and Food Safety Specialist at IICA, told participants.

She explained the “Import Safety” element of the Act, of which the FDA has new tools to ensure that imported foods meet US standards and are safe for their consumers.

“Importers are now responsible for ensuring that their foreign suppliers have adequate preventive controls in place. So, you see the shift from the port of entry inspection to the onus is now on the supplier – the importer in the US has to ensure that whoever he or she buys from, in whichever country, that they have proper preventive control in place.”

“FDA has mandated to work with foreign governments to build their food safety capacity… Capacity building helps to prevent problems before products reach the US port and entry. So, if they can be dealt with here at the source, then it will be less issues when the product reaches the US,” Thomas explained, also reminding participants of the September 2018 compliance date.

“Current exporters who are accessing the market, you will not be able to maintain your presence in the market after September 2018, if you have not put the requirements in place.”

Harvey presented the Barbados: FDA Refusals January 2010 – May 2015, revealing that ‘labelling’ stood out as the main cause with 10 (71.2 per cent) of the refusals.