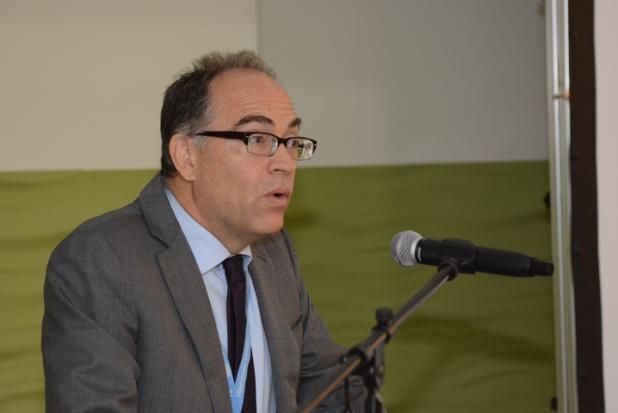 Wed, 12/07/2016 - 12:00am
As the Caribbean Ozone Officers’ Network Meeting took place yesterday at the Radisson Aquatica Hotel, great focus was placed on the topic of reducing ozone depleting substances.
Addressing the regional gathering, Stephen O’Malley, Resident Representative of the United Nations Development Programme (UNDP) for Barbados & the Organisation of Eastern Caribbean States, noted that in relation to these substances, the UNDP is pleased to partner with UNEP-the United Nations Environment Programme and the governments of Barbados and St. Kitts and Nevis, in a holistic approach to the phase out of hydrochlorofluorocarbons or HCFCs (used mainly in refrigeration and air-conditioning equipment), towards the 2020 targets.
“This includes improvement of the policy, legislative and regulatory system, capacity building within the refrigeration and air-conditioning sector which has the highest consumption of HCFCs in these countries and public education and awareness,” O’Malley pointed out.
“This is just one part of our continued co-operation with the countries of the region on greenhouse gas mitigation, including development of national monitoring, verification and reporting systems, development of nationally appropriate mitigation actions and the application of renewable energy,” he also remarked.
O’Malley further pointed out that the Montreal Protocol on Ozone Depleting Substances, is a truly remarkable international success story, both for its results in reversing the effects on the ozone layer, and as a first treaty to achieve universal ratification in 2009. “The countries of the Caribbean have been fully part of this effort, and have shown their dedication to the phase out of ozone-depleting substances from the local market. This complements other mitigation actions articulated in their Nationally Determined Contributions, and the commitment they have made to the Paris Agreement,” he stated.
Furthermore, the UN looks forward to working with the countries of the Caribbean to chart this next phase of their sustainable development. (RSM)