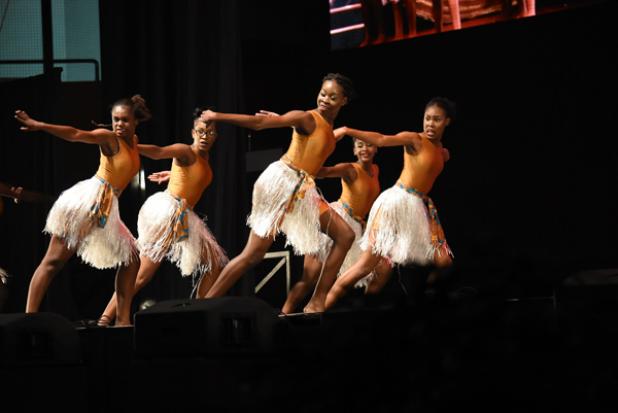 It was an explosion of talent that hit the stage when the Performing Arts Gala of the National Independence Festival of Creative Arts (NIFCA) 2017 of the National Cultural Foundation (NCF) kicked off on Sunday night at the Sir Garfield Sobers Gymnasium.

Patrons to the event were greeted with the drumming talents of the Israel Lovell Foundation with a piece called “Rhythmic Force” upon arrival to the gymnasium. This NIFCA bronze medalist group had Bajans moving their body to the upbeat tempo as they took their seats and as a result, it is not surprising to see why they also received the “Most Promising Performance by a Community Group”.

The George Lamming Primary School who were the third act to take to the stage quickly proved that talent comes in all sizes. The group certainly entertained the audience with Calypsonian, John King’s hit song, “How Many More”.

Meanwhile, the Praise Academy of Dance reminded us all of the importance of lending a hand towards humanitarian causes in their piece entitled, “My World Needs You”. Dressed appropriately in all white, these ladies flowed in their movements across the stage and it was not surprising to see why they were the winners of the “Barbados Gospelfest” Award.

In the second half, one of the performances that certainly caught the attention of the patrons was that of Drayann Cadogan-Regan who sang Andra Day’s song of perseverance, “Rise Up”.

This young lady hit all the right notes in this vocally difficult and diverse song, and therefore it came as no surprise to see why she received an incentive award for the “Most Promising Newcomer” to NIFCA. She also received a bronze medal.

For those in society who are always crying out about how they believe that the youth, especially young men are in crisis, CS Kloud 9 proved them all wrong. Looking suave in their blue jackets with the “leader” in a black suit, these young men performing on various musical instruments, gave the patrons much “food for thought” and it was definitely a great way to end the night. They performed their original of “Mr. Smooth” with an arrangement of “Master Blaster” by Singer/Songwriter, Record Producer, and Multi-Instrumentalist, Stevland Morris, more popularly known as Stevie Wonder. (PJT)