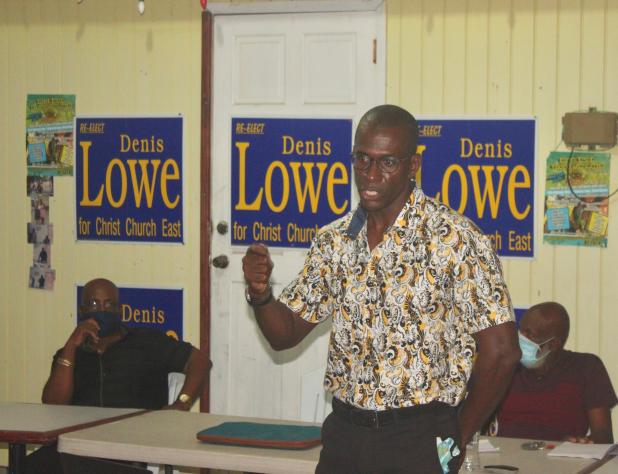 The Democratic Labour Party (DLP) has a hefty assignment ahead of them if they intend to find their way back into government in the next general election and this was acknowledged by former General Secretary, George Pilgrim. Pilgrim, who is set to vie for the position of President of the party, was speaking this past Sunday during a branch meeting hosted in Christ Church East by representative Denis Lowe.

During the meeting in Chancery Lane, which saw the likes of former government ministers Ronald Jones, Steven Blackett, James Paul and current party President, Verla Depeiza, Pilgrim held a captive audience of party-faithfuls as the feature speaker. During his presentation which was titled Dems Onward: Everyone Has Value, Pilgrim noted that there needed to be a national admittance that there were persons falling through the cracks and that it needed to be rectified. “Right now in this country, labour is unrepresented, because you have conflicting agendas within the labour movement. You saw the NUPW going to arbitration and you are seeing the Barbados Workers Union where there are elements of the Barbados Workers Union who are more concerned with securing a nomination for a seat than securing the rights of workers. When I tell you in this country that we have to have an appreciation that everyone has value, and I say to you today that the workers of this country have been thrown under the bus and we have to contend with the fact that until we have a plan, that a lot of people in this country are going to fall by the wayside,” he said.

Stating that the DLP needed to become a party of ideas by connecting and engaging members of the public, Pilgrim highlighted the importance of recognising the value of each member of society. Noting that at present, there was a lack of public participation, he said that the shortfall of engagement was not just as a party, but as a society and that it was eating away at the fabric of the nation’s democracy. “We have to find a way to increase our networks, we have to find a way to rebuild our relationships, we have to find a way to rebuild our community. We must become that party of ideas. This government is not about building communities. It is not about connecting in that way. They have shut the country down and you have to understand that. In all of my years of research and teaching and moving around, I have never seen or read of anything like this yet, where a country is shut down and life goes on normal as if there is a brighter tomorrow when we know that things are getting tougher in the country.”

Going on to cite some of the economic woes being experienced by the country, Pilgrim noted that although it was democracy that saw his party falling from grace, in his opinion, that same democracy was responsible for the situation the country found itself in at present. “Despite this country functioning within the framework of democracy, the democracy that we have is failing. We have to ask ourselves whether or not the whole concept of democracy has to be refined because democracy has the possibility of stunting and standing in the way of growth. One can say, on the outside, that the country had a fair election. The people of Barbados voted and they spoke to the issues and the government was replaced through legitimate means. You can all say those things, but then you have to ask pertinent questions about whether or not this democracy is working in the interest of Barbadians. Not along political lines, but along survival lines,” it was further pointed out.

Reiterating the fact that relationships are key for political parties, Pilgrim said that the time had come for the DLP to move forward as a unit to regain the trust of the Barbadian people. “We have to reconnect as a party. There’s a perception – let’s accept that it’s real – that the voters were hiding. We have to fix that. We have to mend those fences with the voters of Barbados. Very, very important,” he said. (MP)