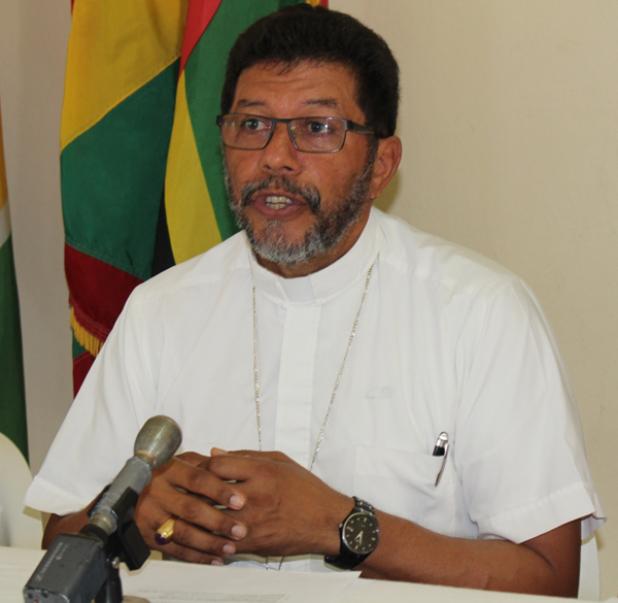 Thu, 09/08/2016 - 12:00am
The last census done in Barbados in 2010 showed there were 49 000 people who said they had “no religion”.
Expressing concern about these staggering statistics, Roman Catholic Bishop for Bridgetown, Barbados, Jason Gordon, has expressed concern about the number of young people “checking out from church” and leaning towards atheism. He has also suggested that a number of social ills plaguing Barbados at present, including gun violence, may be linked somehow to these factors.
The Bishop’s comments came as he addressed the media yesterday at the Living Water Community Centre in St. David’s, Christ Church, as the Roman Catholic Diocese of Bridgetown hosted the 9th Annual General Meeting of SIGNIS Caribbean.
SIGNIS Caribbean has brought together Catholic communicators from across the region to embark on an Integrated Pastoral Communications Plan, as a means of engaging the wider community and also sharing the church’s position on a number of societal issues.
“That [49 000] for Barbados is a very high number,” Bishop Gordon said of the statistics from the census.
“Barbados has always been known as a very religious society. So when the fastest growing category is ‘no religion’, you know you have a problem that is starting to escalate and we are going in a particular direction,” he further commented.
“When you reach that, you can’t disconnect that from all the other social ills that we have, because  now we are finding a generation growing up in households where they have no reference to God whatsoever and so they are growing up with atheism being absolutely normal, [even though] their friends [maybe] going to church,” the Bishop stated.
“You also have the younger generation who are checking out of church  because their brains can no longer span the kind of attention span that we expect for the older people who go to church. So we have to address these things because if we are going to do evangelisation and if we are going to do culture building and if we are going to work within our society to help to  grow standards, then we have to reach to each of these groups in a way that makes sense to them,” he added. (RSM)