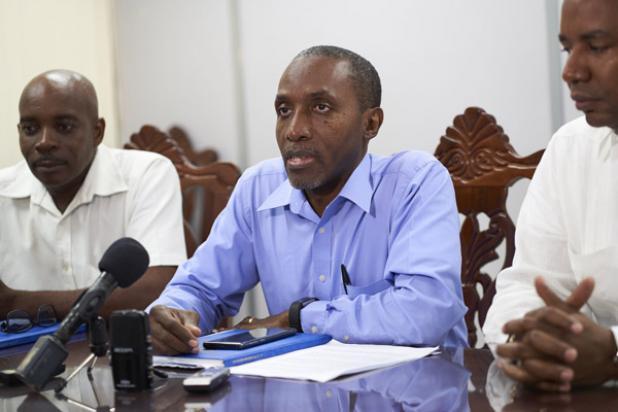 THE Barbados Water Authority’s (BWA) worker-led Extended Hours Burst programme will come to a close on February 14 on a very good note.

In fact, BWA Director of Engineering Charles Leslie explained that the backlog of calls and complaints about burst pipes across the island has been erased. He was speaking to the media on Wednesday where he highlighted the role of the union representatives and workers to make this project a reality.

“We had about 11 000 calls on thesystem. Where we did an assessment approximately 6 000 of those were actually jobs add a number of them were just duplicates, i.e, people calling back a number of times. But we have completely reduce the back log of 6 000.”

He explained how the 12-week programme worked. “At the onset of the programme we had crews that were just working from 8 am until 4 pm. We had 14 plumbing crews working in the distribution section, they were just working from eight until four and then on weekends and bank holidays we had a skeleton crew doing burst repairs. Under this programme we extended those hours so all of the crews have been working from 7 am to 7 pm Monday to Saturday, and then on Sundays and holidays we have between three to four crews working.”

“With that number of crews out there on the island addressing the problems we were able to reduce those complaints and we are actually current with the complaints that are coming in. This problem that we are working on today was only reported yesterday and we are here today to do repairs on this one,” Abrahamscontinued.

He noted that whereas in the “normal” programme, teams were carrying out 750 repairs per month, with the new programme the crews were able to double and go even further.

“Once we have addressed these obviously we are reducing the non-revenue water – we are addressing the complaints. So we don’t have those frequent complaints. We are reducing the duplicates in the system as well, because what we found is when we have things running for too long, we have a number of customers calling repeated times so then we have multiple complaints for the same problem. And we have reduced all of that in our system,” he said.

President of the Barbados Workers’ Union Division of the BWA Carl Boyce assured that systems will be put in place to ensure that the backlog will not return. “So we are improving on that as well even though the programme might stop on the 14th we are still having a system where the burst pipes will be managed in a timely manner,” he said.

Assessing the programme from the union’s perspective Boyce said, “We were glad to sit across the table with both the management and the Minister in relation to improving the service to Barbados because we know it is a service that we are delivering to Barbados and theworkers have a part to play in it.”

He also thanked Minister Abrahams for ensuring that workers had adequate materials and equipment to carry out the tasks. (JH)