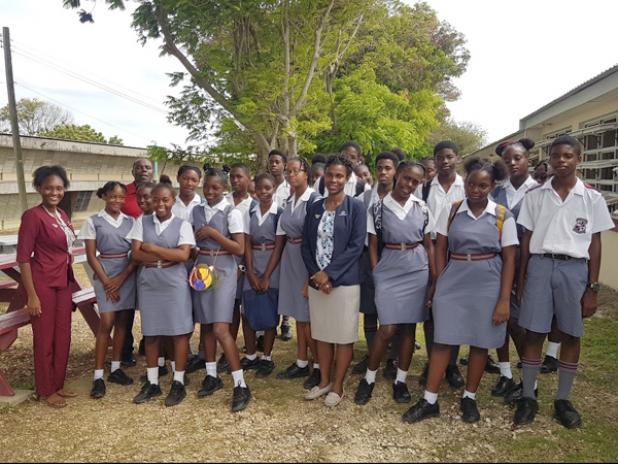 CP gets a makeover with Berger

The Coleridge and Parry School’s surroundings will be a little brighter thanks to Berger Paints Barbados Limited.

On Monday, President of the Coleridge and Parry School’s Parent Teacher Association, Emmerson Herbert told the school’s morning assembly about the ongoing beautification painting project on the second and third form block. He asked the students, some of whom volunteered to paint the building, to show their appreciation to Berger for providing the resources to make the project possible.

After assembly, Marketing Assistant for Berger Paints Barbados Limited, Renee Cobham spoke to The Barbados Advocate and said that the company donated fifteen five-gallon pails of paint to the rural school. She explained that Berger had received a letter from Coleridge and Parry seeking assistance.

“[Berger] recognised the need to maintain the schools. It is something that we started in 2018 with the “Conceive, Create, Cultivate” initiative and we are just continuing wherever possible to assist the government institutions with their refurbishment projects,” said Cobham.

She mentioned that in the past, Berger has assisted Eagle Hall Primary School, Westbury Primary School and through other corporate entities such CIBC First Caribbean International Bank, Rubis, they have sponsored the paint to beautify the interior of some other primary schools.

Cobham who was accompanied by Colour Advisor for Berger Paints Barbados Limited, Charlene Medford, joined Herbert for a brief tour of one of the school blocks which had already been painted.