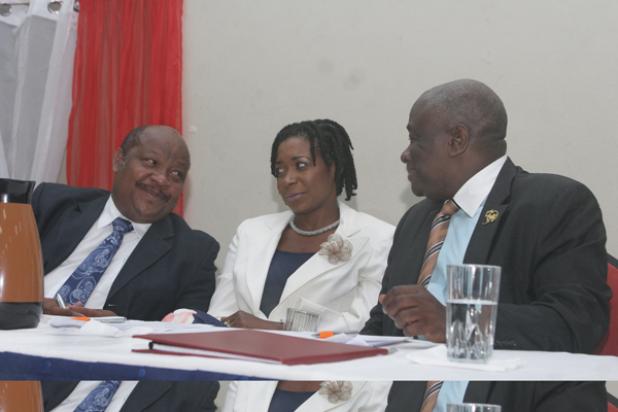 Collaboration needed in the judicial system

Thu, 10/27/2016 - 12:00am
By:
Peta Rowe-Forde
Upon the conclusion of a panel discussion held to discuss, “The Criminal Justice System of Barbados, 50 Years and Beyond”, a common consensus coming out of it, was that there needs to be greater collaboration among the agencies within the judicial
system.
Word of this first came from Chief Justice, Sir Marston Gibson, who stated that he has been pleading for greater collaboration within the judicial system for quite some time. He explained that such agencies do not speak to each other and the public as often as they should, and if there is to be any more efficiency within the system, the lack of communication must be discontinued.
Continuing further was Justice William Chandler. Chandler, made mention of the backlog which is a topic of discussion whenever the judicial system comes up. His honour noted that there is not a country in the world without a backlog and that contrary to popular belief, there are many extraneous variables which contribute to it. Explaining this, he mentioned limited staffing, the fact that not many lawyers practice criminal law and the unfortunate situation where there are only ten magistrates.
However, without lamenting on the problems for long, Justice Chandler insisted that the system is in need of reform. He spoke of the 120 reform recommendations that were made at a retreat, out of which only three were acted on.  Interventions, such as information technology advances and division of labour were two being looked at. Further, he stated that reform cannot be done “willy nilly” but, “We have to understand that resources have to be allocated all through the system.” Justice Chandler emphasised that entities such as UWI would need to be employed to do research to find out the exact problem areas that require reform.
The Royal Barbados Police Force contributed to the discussion as well through Assistant Commissioner Erwin Boyce. Boyce concurred that reform and communication is needed in the system but advocated that the Royal Barbados Police Force is doing a great job at doing so thus far. He noted that the Force, in the face of the recession and knowing it is a heavy investment by the Government, sought to reduce wastage and increase productivity and moved from a reactive style of policing to a proactive one. Added to that, the Force has developed several programmes but according to Assistant Commissioner Boyce, it has faced many challenges regarding its efficiency and effectiveness over the years.
Also on hand were representatives from the Barbados Prison Service, The Probation Department and the Forensics Lab. All of whom outlined the challenges faced within their agencies but hope that greater communication will bring about efficiency in the next 50 years.