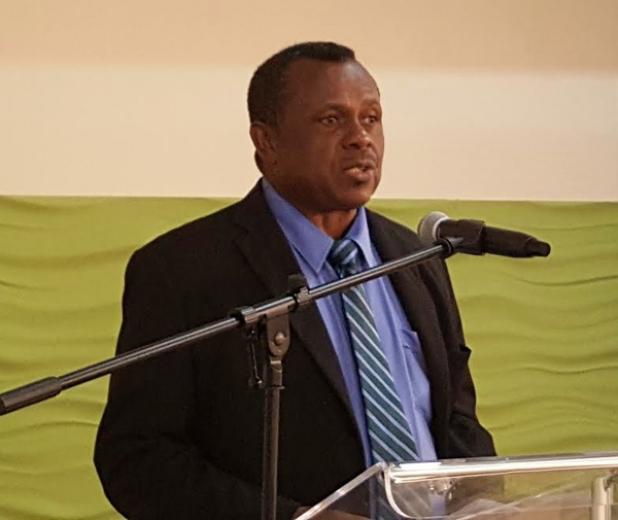 Permanent Secretary in the Ministry of Environment and Drainage, Edison Alleyne as he delivered remarks at the official opening of the Caribbean Ozone Officers’ Network Meeting.

Wed, 12/07/2016 - 12:00am
As part of its long-term compliance obligation under the Montreal Protocol, the Ministry of Environment and Drainage is seeking to have a transition towards non-ozone depleting, climate friendly and energy efficient alternatives in the refrigeration and air-conditioning sector.
Permanent Secretary in the Ministry of Environment and Drainage, Edison Alleyne pointed out the above yesterday, as he delivered remarks at the official opening ceremony for the Caribbean Ozone Officers’ Network Meeting at the Radisson Aquatica Hotel.
During the meeting, it was noted that a holistic approach is being taken to phase out ozone depleting substances, namely hydrochlorofluorocarbons or HCFCs, which are used mainly in refrigeration and air-conditioning equipment.
Noting that the National Ozone Depleting Substances Management Programme was established in 1994 and that Barbados has been an active member of the Caribbean Ozone Officers’ Network since its inception, Alleyne said that like all developing countries, the national programme is now focused on the implementation of activities to sequentially reduce HCFC consumption. Alleyne, however noted that the Ministry is cognisant that as it seeks these alternatives, proposed measures must take stock of the technological maturity of the industry, as well as ensuring that access to refrigeration and air-conditioning services are not compromised. He meanwhile noted that the country is on track to realising the allocated 35 per cent reduction target by 2020, stipulated under the Montreal Protocol.
With regard to the Montreal Protocol, Alleyne noted that the Ministry greatly appreciates the historical and ongoing support that the Multilateral Fund for the implementation of the Protocol has provided over the past 22 years, as well as to the entire Caribbean Region.
“As Permanent Secretary for the Environment, I have been fortunate to witness many of the developments and successes that we have achieved as a consequence of this support, as well as through the many other facilities available to developing countries, under the Protocol,” Alleyne noted.
Some of these achievements he said, include the establishment of the Refrigeration and Air Conditioning (RAC) Association of Barbados, which provides a forum for technicians and other persons in the sector to meet, discuss and resolve issues of common concern, as well as provide support to the monitoring and compliance programme of the Ministry.
Also, the definition and enactment of a regulatory mechanism for trade in Ozone Depleting Substances.
“This has enabled us to meet the phase-out requirements for all Ozone Depleting Substances (ODS) that are now globally banned, as well as to manage the hydrochlorofluorocarbons (HCFCs) quota system now being implemented,” Alleyne remarked.
He also made mention of the supply of equipment and tools to local technicians, to the RAC Association, the Customs and Excise Department as well as the Samuel Jackman Prescod Polytechnic, to enable their respective contributions to the national programme. (RSM)