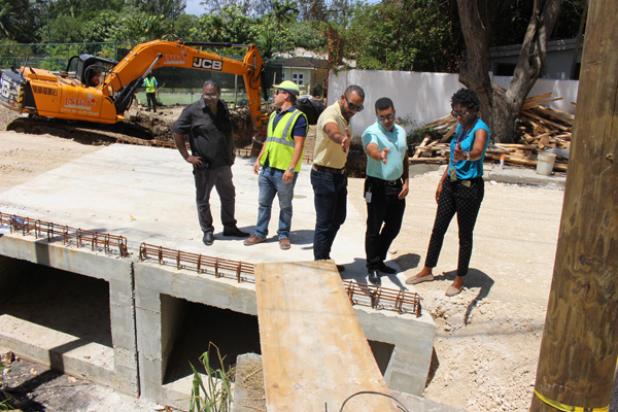 PROJECT Manager in the Ministry of Environment and National Beautification, Ricardo Marshall, says that the effects of climate change will be challenging for areas in Barbados.

He was speaking to the media recently as he gave an update on the Porters/Trents stretch, which was re-opened earlier this week. It forms part of the works on the west coast that will seek to alleviate flooding in that area which is prone to flooding.

On Monday the section in Sunset Crest was also re-opened and Marshall used the opportunity to thank residents and the business community for being supportive of the ongoing work.

“They understand we have challenges in this area with draining and flooding and that we are trying to alleviate the situation.

“The reality is the effects of climate change are making it even more challenging for us. We are essentially getting the same amount of rainfall a year but it is in a shorter period of time. We are getting longer droughts and then we are getting more rainfall events and those then contribute doubly towards the chances of flooding,” he explained.

“In this area – in Porters and Trents going all the way back to Sunset Crest, Holetown, Vaux Hall, Sandy Lane – traditionally those would have been swamp areas and open areas before you had the introduction of plantation agriculture, then you would have had sugar cane fields in some areas. When you look at the map from1951 you wouldn’t believe this area when you look at it compared to now. So you have tremendous development of all sorts – commercial, tourism housing and residential and all of the ancillary services that service all of those,” he said.

Marshall highlighted the ongoing work from the Porters Great House from as far as the existing residual wetlands between Coral Reef and Colony Club.

“Both properties have done a good job of maintaining the land in there and that is where the water ends up before going into the sea. So there is that eco-based adaptation that allows for essentially processing and making the water cleaner before it goes into the near-shore environment.

“We have also had a lot of issues coming through between the houses in Trents Tenantry and what we are seeking to do is to raise the level of the existing drain. If you follow it as well we have to put up new drainage areas between the homes to try and confine the water as much as possible to the channels,” he said. (JH)
ﾖ