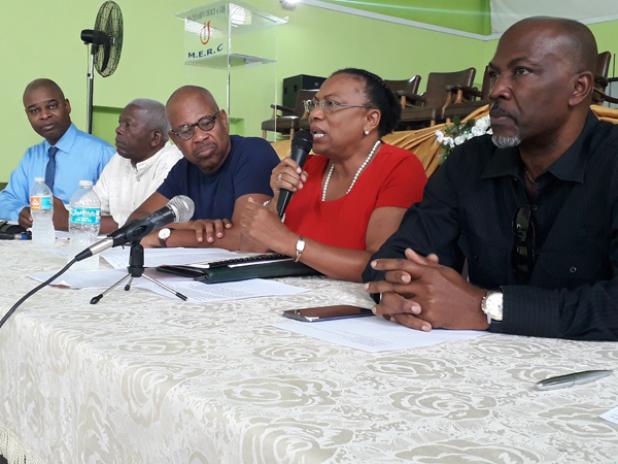 THE local church is ready to fight against any attempt to make homosexual preferences a human right in Barbados.

Yesterday, ahead of a Gay Pride March scheduled to take place next Sunday, a group of church leaders held a press conference at the New Testament Church, Mercy Building Complex, Fairchild Street, St Michael, where they declared that they are opposed to and are confronting the LGBT agenda, and not the community of the LGBT.

The church leaders are also strongly against the agenda the upcoming Gay Pride March is seeking to promote.

“Every activity that they engage in is an attempt to push the agenda. So we have opposed, not necessarily the March, but the agenda, and that’s what we are opposing. So our act today, our demonstration today, our protest today, is a protest against the agenda.

“This agenda, we must understand, is a new form of neo-colonialism, because it hasn’t emerged from Barbados. It is a global agenda to influence different nations. In fact, agencies are attaching aid and economic support and technical assistance to the LGBT agenda.

Meanwhile, sociologist, Dr Veronica Evelyn, who was also present at the press conference, told members of the media that she holds the view that local gay organisations have no say in the matter of the gay agenda being pushed, as she made reference to a recent legal case between members of the gay community and the assistance they have been receiving from an internationally recognised organisation.

“Some people understand that it is just one small group that is attempting to change God’s word, but they cannot ever,” Dr Evelyn stressed.

The LGBT agenda the church is targeting includes an attempt to make the personal sexual preference of a very small group a human right in Barbados, to impose the homosexuality lifestyle as a natural organic sexual behaviour and not a learned behaviour on the majority of Barbados’ population, to deconstruct marriage and to reconstruct it to legitimise same sex partnerships as opposed to the Adam and Eve marriage union for the entire population.

The church is also confronting the LGBT community for attempting to deconstruct the nuclear family from a family of Adam and Eve, with Cain and Abel and reconstruct a family model that undermines procreation and future generations.
(AH)