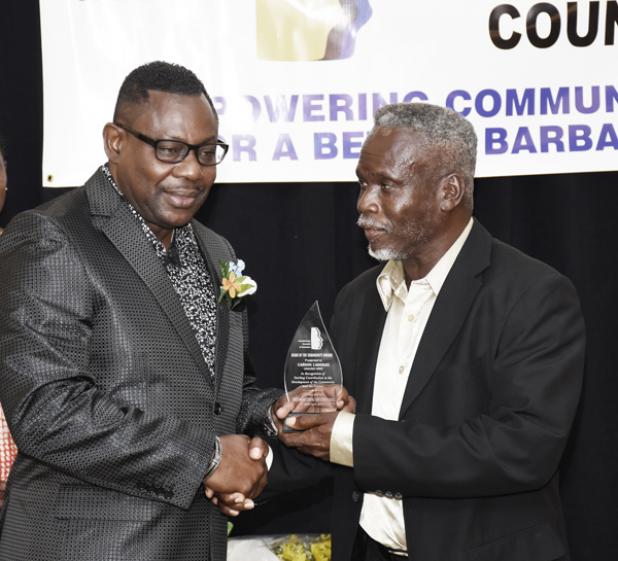 Minister of Social Care, Constituency Empowerment and Community Development, Steven Blackett presents Carson Cadogan (right) with the top award of the night -– The Chairman’s Award for his contribution to the community and the country.

Carson Cadogan walks away with top award for contribution to community

Carson Cadogan walked away with the top award – The Chairman’s Award at the inaugural Gems of the Community Awards Ceremony held at the Radisson Aquatica.

Among his many contributions to the community were assisting those who were in need of food to get meals; assisting needy families to purchase school items for their children and helping persons in the constituency find employment.

According to Jo-Anne Sealy-Cumberbatch who read the citations at the Inaugural Awards Ceremony for the residents of the St. Michael Central Constituency Council on Sunday night at the Radisson Aquatica, Cadogan also served on the Constituency Council for the area where he helped residents of this constituency with the various things that they would have needed such as roof repairs, help in purchasing school uniforms and other items; helping neighbourhoods with removing trees and clearing of bushes and providing small businessmen and businesswomen with an opportunity for self development and business development through seminars.

In 2015, Cadogan also worked as an unofficial liaison with the Constituency representative during the road network in the area of Water Hall Land, St. Michael. Here, he ensured that the civil works was being done efficiently, said Sealy-Cumberbatch.
“Morning, noon and night, he walked the district to ensure that the civil works was being done properly and to the satisfaction of the residents. The roads were rebuilt, the first time since they were done 50 years ago; new sidewalks and slipways were created; all the wells were cleaned and new wells dug; natural gas was installed in areas where they were none previously. Every household could now have natural gas pipelines running to it.”

Furthermore, as Justice of the Peace, he also assisted many persons with reference letters, affidavits and other official forms.

Outside of his community work, Cadogan worked in the hospitality industry for close to four decades in Barbados and across the region. His work in this country included encouraging visitors to return to this island, said Sealy-Cumberbatch.
“Throughout his lifetime Carson worked for 39 years in the hospitality industry. While most of that time was spent working here in Barbados, he also worked in the Caribbean for Sandals Hotels in Jamaica, St. Lucia and Antigua. While serving in the tourism industry, he was an outstanding tourism ambassador for Barbados and the Caribbean, doing his utmost to encourage the guests to be long stay and repeat visitors to the islands by making their experience as hospitable and comfortable as possible.”

Other persons also received awards on that night for their contribution to such areas as business, performing arts and culture, the community, sports, education and healthcare. (PJT)